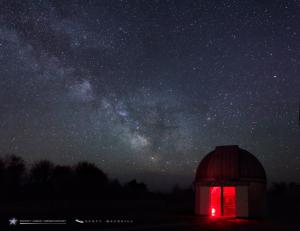 Tonight's weather is yet again looking great for stargazing! We can expect partly cloudy conditions at sunset which should quickly clear up, revealing the stunning starscape. Additionally, the 11% waning crescent Moon will not rise until 4:07 a.m. leaving an entire night of awesomely dark skies. This will give us fabulous opportunities at striking views of the fantastic Comet C/2014 Q2 Lovejoy, which continues to brighten and is showing off a huge coma (thin atmosphere around comet's nucleus) and sexy tail. Winds will be a bit high and could become problematic with a slight chance of gusts reaching 30mph, though overall it looks to be a killer night!

We plan to open the Observatory & Sky Theatre at 6:30 p.m. In the Observatory, telescopes will be focused on Jupiter and an impressive list of deep sky objects including the Orion Nebula, Messier 37 Open Star Cluster, the Eskimo Nebula, and more. Periodically throughout the night we will showcase Comet Lovejoy in our telescopes offering different points of view of this stunning comet. The Sky Theatre will be open all night long and toasty warm offering a break from the cold for the summer at heart. Slide shows and possibly live views of Comet Lovejoy will be available in the Sky Theatre. Dress warm as temperatures will be around 20° and dropping into the single digits overnight with wind chills around -1º. Bring it on Winter!

Though it will be cold, the skies will be hot! The winter starscape at Frosty Drew is absolutely mesmerizing and this looks to be the night to get out there. Dress warm, bring binoculars, a telescope, or just your awesome self and plan to make your own personal discovery of the Universe at Frosty Drew tonight.

On Monday January 26, 2015 a rather large asteroid will cruise past Earth at quite a close distance. So close, that it will mark the closest pass of an asteroid this size for the next 13 years! Though this passing will be super close, doomsayers are in for a disappointment as no impact threat is imminent. Otherwise, sky watchers are setup for possibly the best visible asteroid pass... ever?

Discovered on January 30, 2004 by the Lincoln Near-Earth Asteroid Research (LINEAR) survey, Asteroid 2004 BL86 is near 0.3 miles in diameter, making it about twice the size of an aircraft carrier. Swinging by Earth at a distance of 745,000 miles (three times the distance of the Moon) and at speeds of 35,057 mph, the asteroid will be easily visible in backyard telescopes and possibly large binoculars. Unlike many Near-Earth Asteroids (NEA), 2004 BL86's close encounter has been known for some time and is surely not a surprise pass.

Viewing the asteroid should be easy. The asteroid's closest point will occur about 11:20 a.m. EST, though visibility will be excellent for U.S. stargazers that night. Passing into the constellation Cancer just after sunset, 2004 BL86 will visibly traverse the constellation Cancer over the course of the night. Additionally, between midnight and 1:00 a.m. EST (Jan 27th), 2004 BL86 will have a visibly close encounter with the fabulous Beehive Star Cluster (Messier 44) in Cancer, passing just to the East of the cluster. This will make it easily identifiable for non-computerized telescopes. Over the course of 10 minutes, the asteroid's visible position in a telescope will chance dramatically, moving almost the diameter of the full Moon among fixed stars. Look for the star that changes position over the course of a minute, that's the asteroid.

Hey, like a naked eye comet (Comet C/2014 Q2 Lovejoy) isn't cool enough. Now we have a Near-Earth Asteroid passing too. If you can't get out on the 26th to catch a view (you know, New England weather?), catch a view online compliments of the Virtual Telescope Project.