The Frosty Drew Observatory has numerous telescopes and accessories for viewing the cosmos thanks to generous supporters, donors, and grants. Below we explain some of our more popular telescopes and accessories that you are sure to see on our publicly open nights. At the center of our astronomical operations is our Ash dome, an 18 foot enclosure that houses our main telescope and serves as our central hub on nights open to the public. The dome was erected in 1986 after the site was realized for its fantastically dark sky conditions. Since its opening in 1986 Frosty Drew Observatory has been a local icon for astronomical observation. 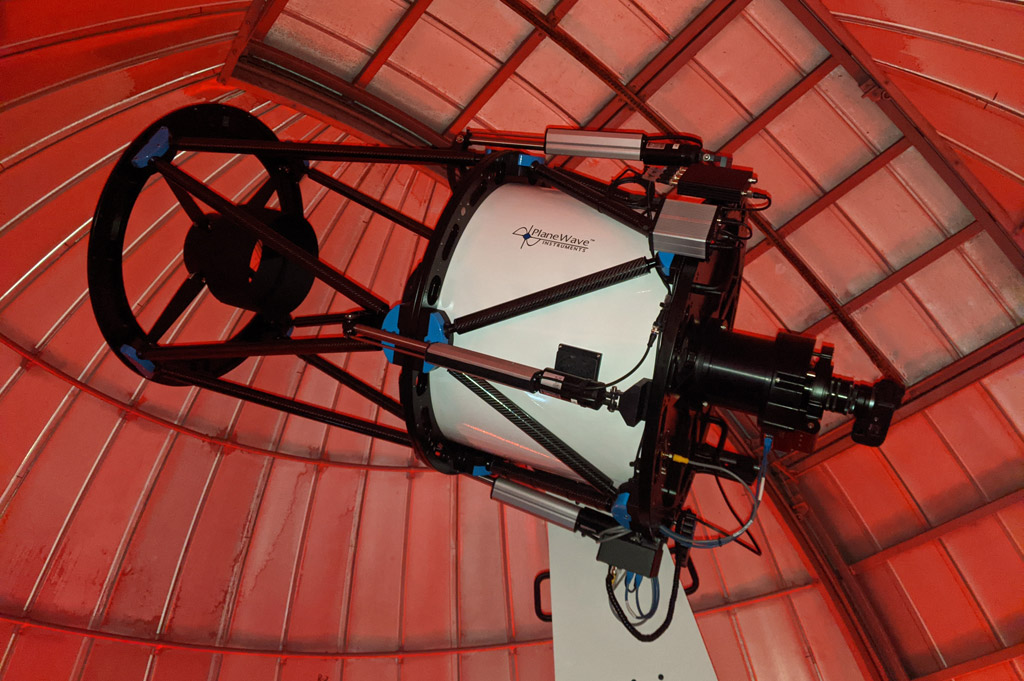 Our center piece is a PlaneWave Corrected Dall-Kirham 24" (609.6 millimeters) telescope attached to a PlaneWave L-600 mount on an alt-azimuth pier. It was installed in October of 2021, and was made possible by a grant from The Champlin Foundation. You can keep up with its accomplishments in the Frosty Drew Observatory CDK600 Life List. The Corrected Dall-Kirkham telescope is based on a new optical design developed by Dave Rowe, with the goal of addressing image degradation from either coma, off-axis astigmatism, or field curvature. The CDK is coma free, has no off-axis astigmatism, and has a flat field. To accomplish this, the CDK consists of three components: an ellipsoidal primary mirror, a spherical secondary mirror and a lens group. The result of this design is pinpoint stars across the entire 52 to 70mm image plane.

The PlaneWave L-600 mount, which our 24" CDK telescope (CDK24) is attached to, utilizes a direct drive mount system, and is configured in ALT-AZ. Direct Drive 3 Phase Axial-Flux Torque Motors and a 152mm stainless steel encoder ring with reader built into the azimuth and altitude axes, that integrate 18,880,000 counts per revolution, eliminate the need for gears, effectively eliminating backlash and periodic error. This gives us an effective resolution of 0.069 arcseconds, with a tracking accuracy of <0.3 arcseconds over a 5 minute period. Not only will the telescope track without periodic error and backlash, the mount will also counter wind gusts with precise servo feedback. Additionally, the L-600 has virtually silent motion with slew speeds of up to 50 degrees per second.

The CDK24 telescope utilizes the IRF 90 Rotating Focuser allowing for field derotation as well as automated focusing. We have integrated the PlaneWave Automated Primary Mirror Shutter system to reduce environmental exposure to the primary mirror. We also have the ability to reduce the telescope's focal ratio to F/4.4. 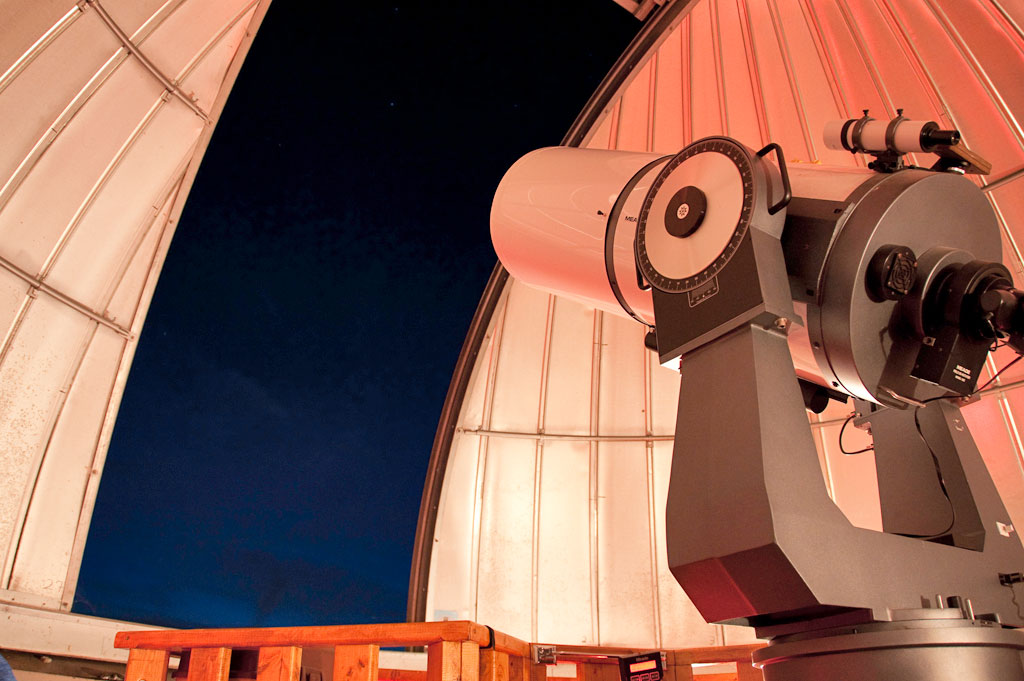 Our Meade Schmidt Cassegrain LX200 16" (406.4 millimeters) telescope used to be the main observatory telescope. It was installed in July of 1999, and remained actively used in the observatory until October of 2021. You can see its accomplishments as the primary observatory telescope by visiting the Frosty Drew Observatory Life List. The words Schmidt and Cassegrain are the names of telescope designers who created this basic type of telescope. A Cassegrain telescope has a hole in the mirror at the back end of the telescope. This allows the eyepiece to remain at a convenient level and easy to reach. A Schmidt telescope uses a thin glass plate, called a "corrector plate", at the front of the telescope to correct various optical distortions (aberrations). The combination of these two designs allows a long focal length to be folded into a relatively shorted tube, compared to a Newtonian telescope (straight through design). Our LX200 has been upgraded with a modern dovetail and is now attached to a Losmandy G11T German Equatorial Mount with wheels. We can control this telescope remotely using our on-campus automation suite, and is capable of locating as many objects as the primary observatory 24" telescope. The old Meade LX200 can be seen on our North Lawn during public events. 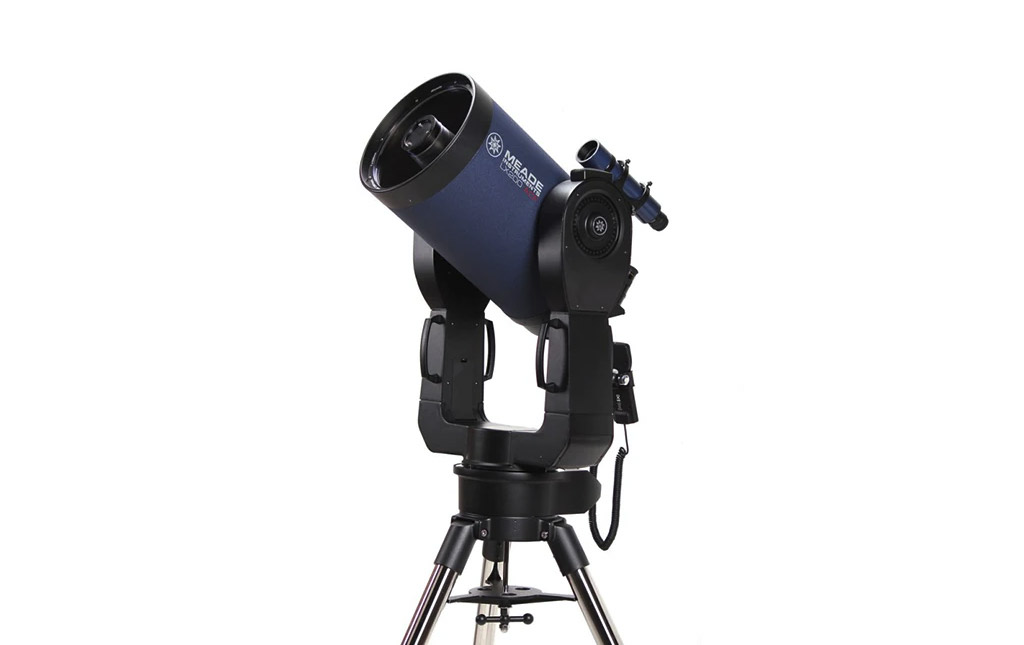 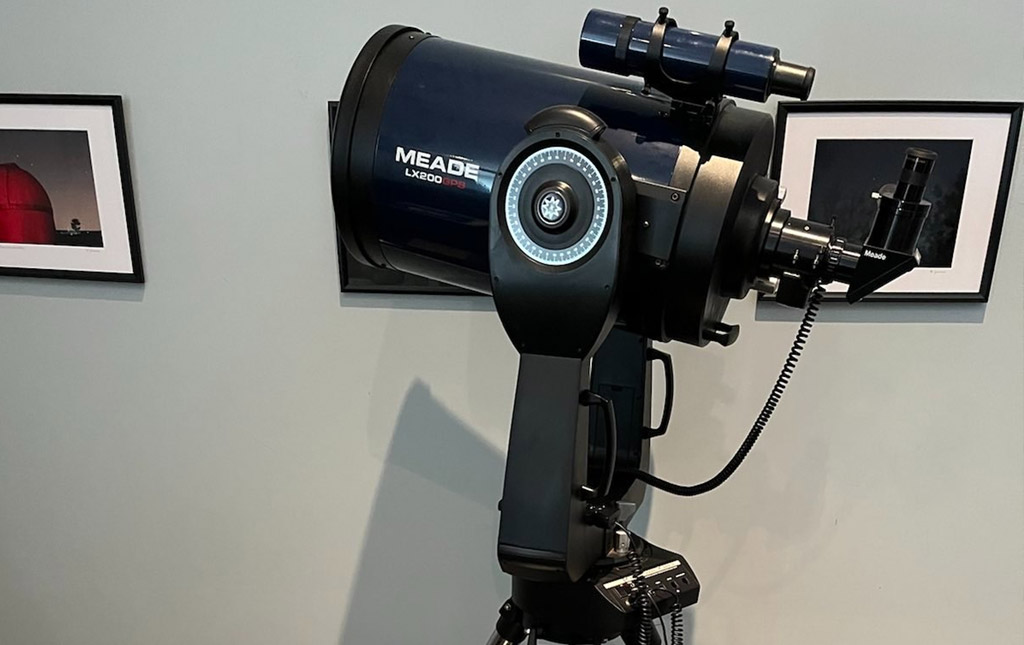 Meade 10" LX200 R SCT
Crystal Romano of Rhode Island donated her father's Meade LX200 R 10" Schmidt Cassegrain Telescope to Frosty Drew. This telescope is the predecessor of our Meade LX200 10" ACF telescope. The telescope has a Meade Zero Image Shift Electronic Focuser Assembly (EFA), as well as other accessories. We can control this telescope remotely using our on-campus automation suite, and is capable of locating as many objects as the primary observatory 24" telescope. We often set up this telescope during our public events. 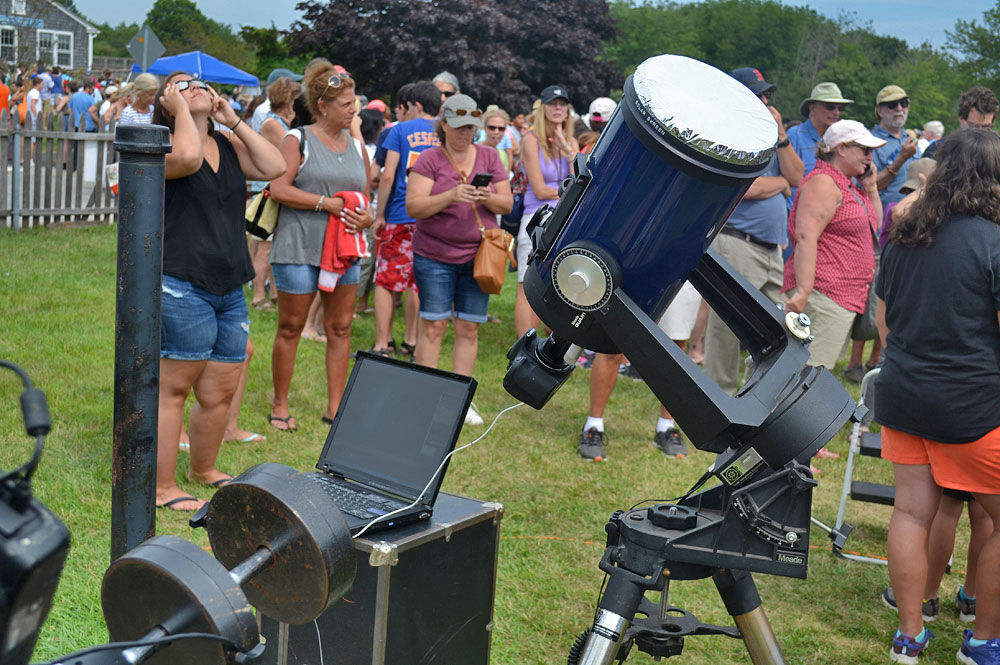 Meade LX3 2080 8" SCT with Silver Coatings
A rather old Meade LX3 2080 Schmidt Cassegrain telescope was donated to Frosty Drew and was in need of some serious love. After a significant overhaul this quality 8" SCT has been integrated into our events fitted with a white light filter, camera, and computer. This telescope produces live telescopic views of the solar photosphere presented in the Sky Theatre, Science Center, Observatory, and on screens around the campus. We have collected quite an archive of solar images with this fine telescope.

Meade LX3 2080 8" SCT with Aluminum Coatings
David Stetter donated his father's old Meade LX3 2080 8" Schmidt Cassegrain Telescope to Frosty Drew. Most of these old models had silver coatings on the primary and secondary mirrors, which did not last. Especially on the secondary mirror, which is the case with our other 8" LX3 telescope. Though Dave's father's LX3 has aluminum coatings, and is in amazing condition! We removed the old fork mount and motor drive from the telescope, and retrofitted the optical tube assembly (OTA) with a modern Vixen dovetail bar. During public events you will see this telescope attached to either our Celestron CGEM DX mount or one of our Orion German Equatorial Mounts. 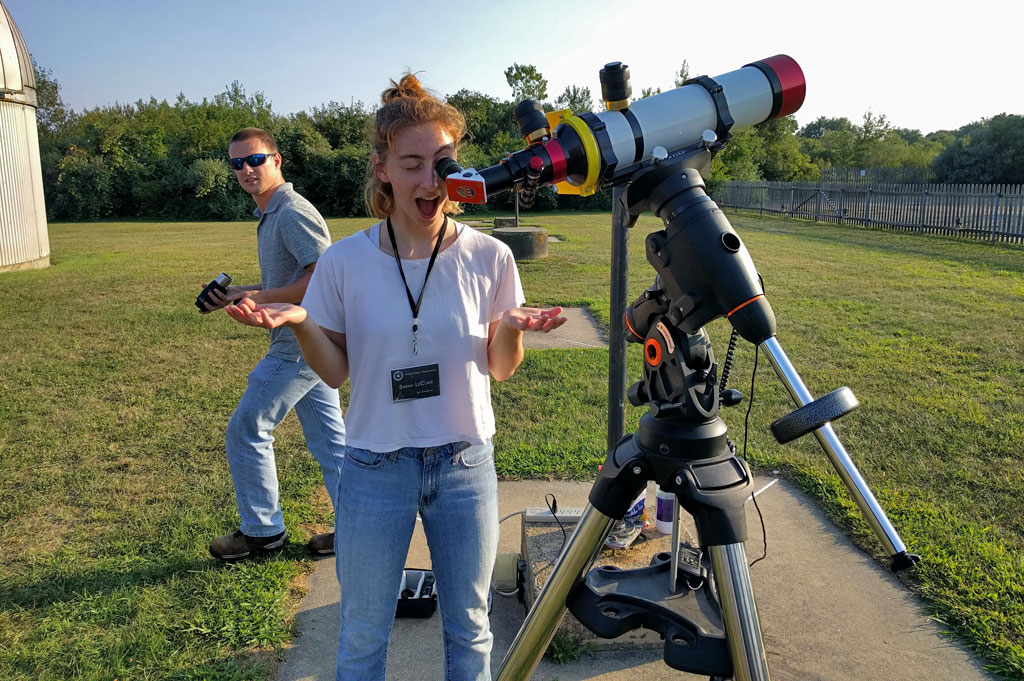 Lunt LS100THa Hydrogen Alpha Telescope
The Champlin Foundation granted us the funds to purchase a Lunt LS100THa hydrogen alpha solar telescope with the double stack etalon. This telescope offers fantastic views of the solar chromosphere including sunspots, the magnetic field lines of the Sun, and prominence. We set up this telescope during our Summer Stargazing Nights events, which run every week from Memorial Day - Labor Day. We also setup this telescope on Friday mornings at the Charlestown Land Trust Farmers Market, as well as any event themed on viewing the Sun, like eclipses and transits. 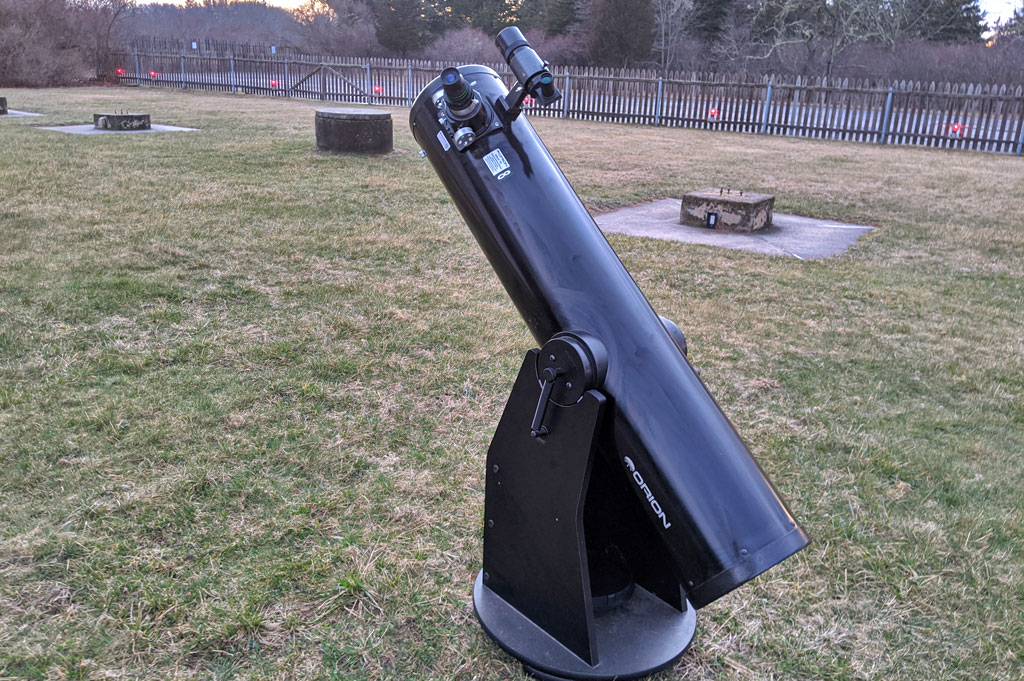 Orion XT8 Dobsonian
Mrs. Marianne Philips of Charlestown donated to Frosty Drew this unused 8" Orion SkyQuest XT8 Dobsonian Telescope. This telescope has fantastic optics, with visual observation that rivals the performance of The Art Guarino 10" Dobsonian Telescope. Due to its portability, ease of use, value, and stunning performance, the Orion XT8 is our top recommended telescope for novice users inquiring about their first telescope purchase. This telescope can be frequently found setup outside the Observatory during events offering views of the Moon, deep sky objects, comets, and planets. 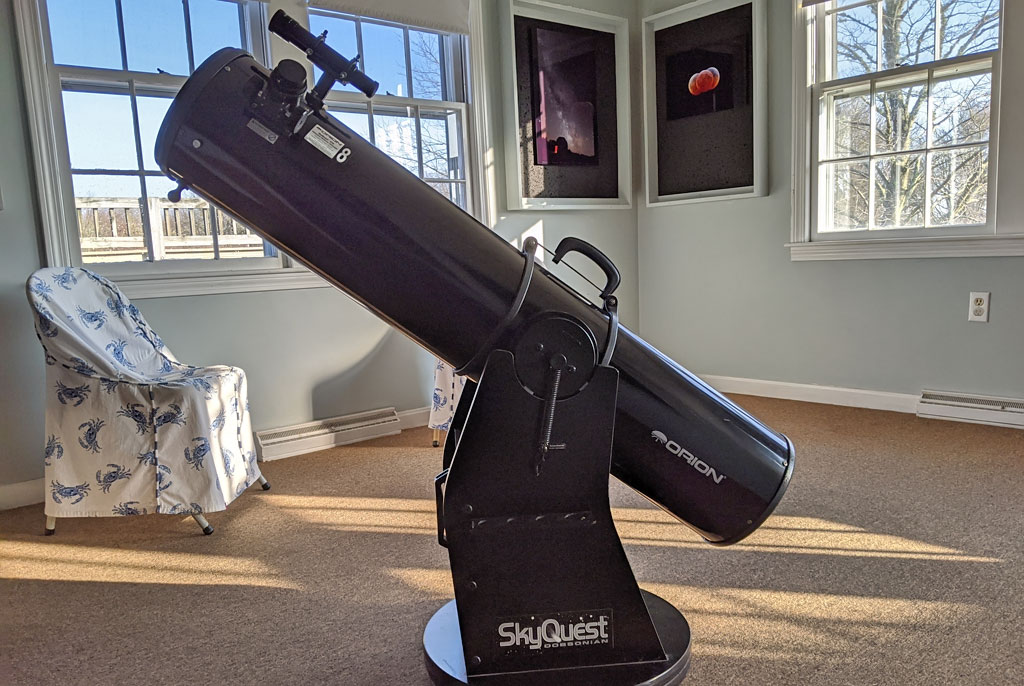 Orion SkyQuest XT8 Dobsonian
Mr. Stephen Day of Ashaway donated to Frosty Drew this excellently maintained classic 8" Orion SkyQuest XT8 Dobsonian Telescope. This telescope is in excellent condition considering its age, and pairs nicely with the Marianne Philips Orion XT8. Upon deeper evaluation of this telescope we had identified three custom modifications that Mr. Day had made, which are genius! He integrated an OTA carrying mechanism, simple spring attachment straps (this is awesome as attaching the tube springs to the mount often results in abrasions on your hands), and a basic attachment to the underside of the OTA aperture end to aid in slewing. We will be integrating this telescope into our program this summer. Stop in to see it in action, mods and all! 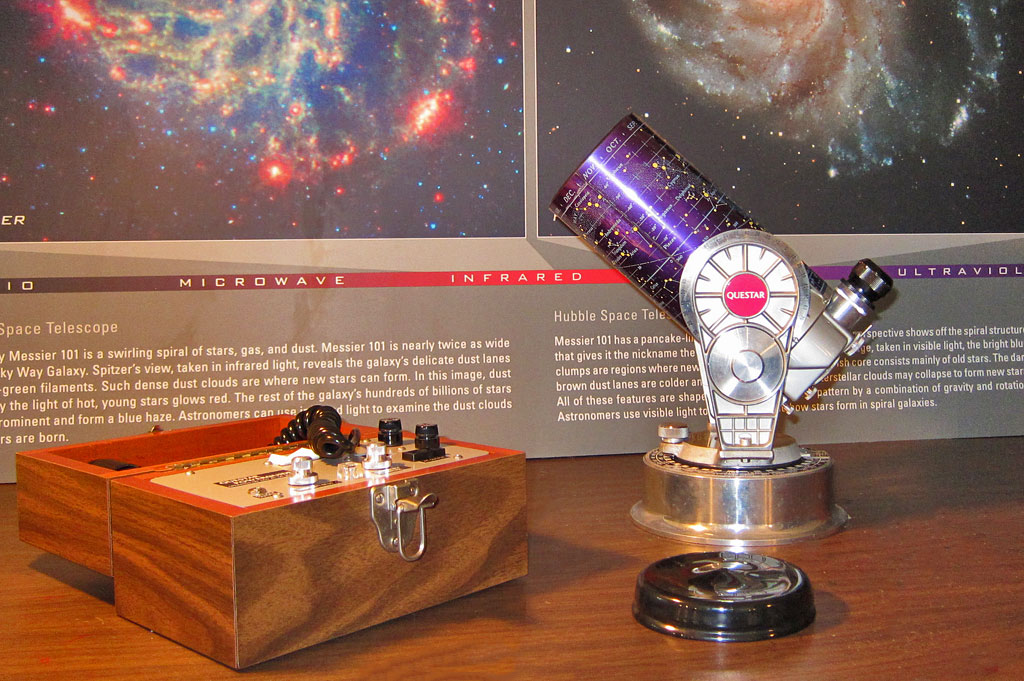 Mrs. Camilla Lee of Narragansett donated her step father Ryder Henry's 40 year old Questar Maksutov Cassegrain telescope. The telescope has been repeatedly sent to the factory in New Hope Pennsylvania for cleaning and improvements. This 50 year old telescope has many of the features of a much newer instrument. The optics of early Questar telescopes were unmatched in their day and still compare very positively with the best modern optics. 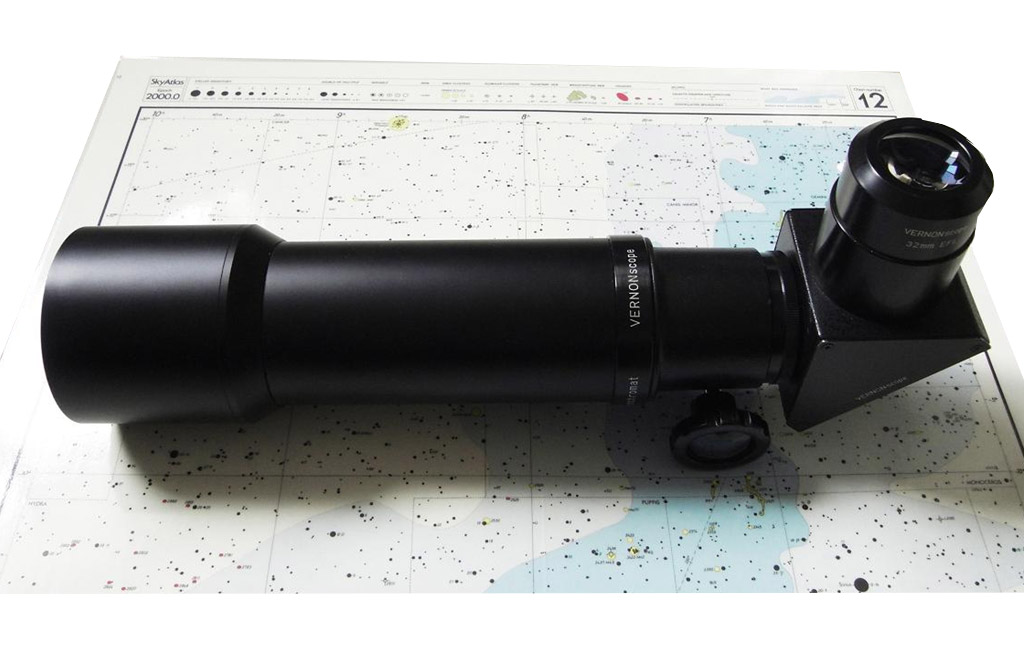 Mrs. Marcia Finnegan donated her father's old 80mm Brandon Refractor Telescope, alongside an impressive set of accessories he had assembled over his years. Though we have separated many of the accessories for use on other devices, the 80mm refractor is a fantastic wide field telescope. We frequently set up this old refractor during our weekly Stargazing Nights events, and other special events, and considered it as a permanent finderscope for our new PlaneWave CDK600 telescope. 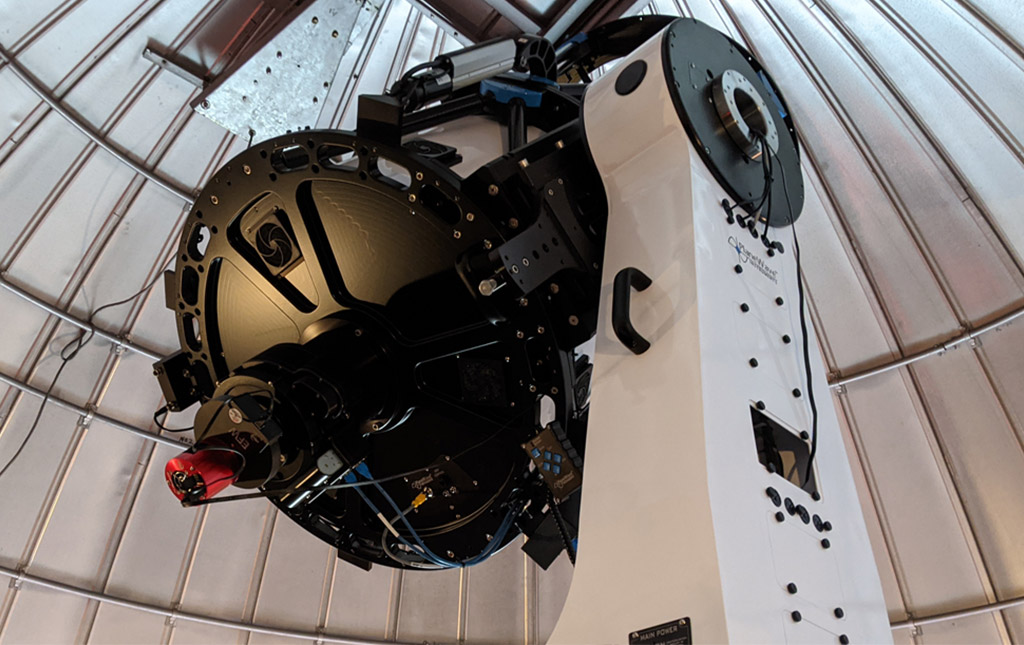 We have the capability to live stream, live stack, and live time-lapse images to the Sky Theatre, Science Center, Observatory, and any other display on the campus, or to the web via our YouTube channel. 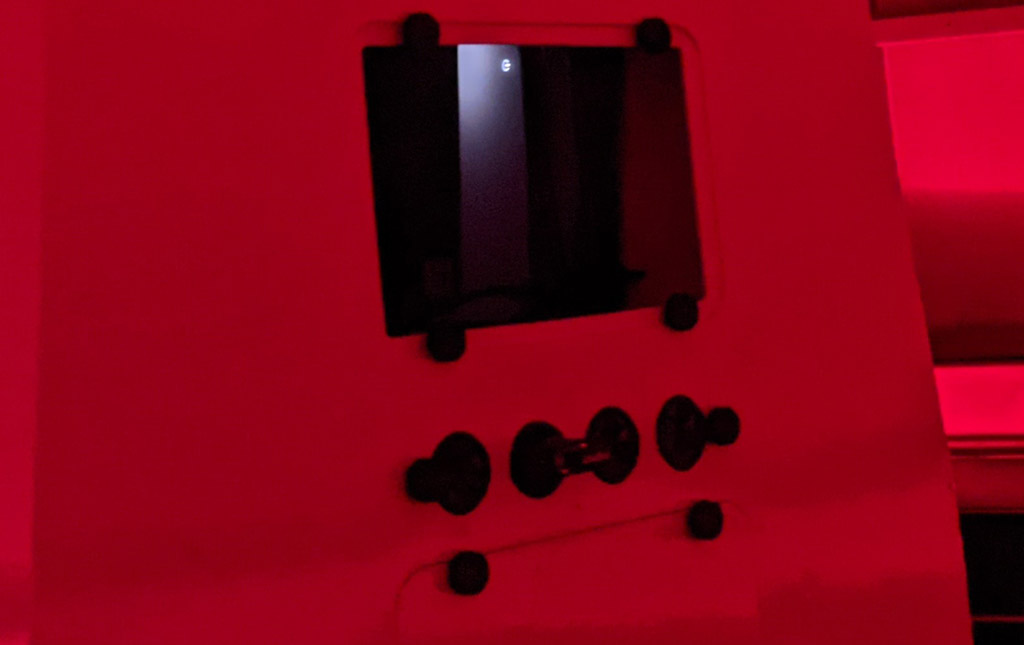 All of our telescopes are interconnected to our campus WiFi network by utilizing single board computers (Intel Atom, Raspberry Pi, etc), making each telescope addressable on the network. This enables us the ability to remotely control each telescope, and / or link all telescopes together. We use this technology to show live images on screens around the Frosty Drew campus, remotely perform data collection, and live stream to the web.

We frequently connect many different cameras and imaging devices to our telescopes. Using this technology, we have been able to archive many of the objects we regularly view. These archived photos are displayed weekly in the Sky Theatre, our website, and social networks. 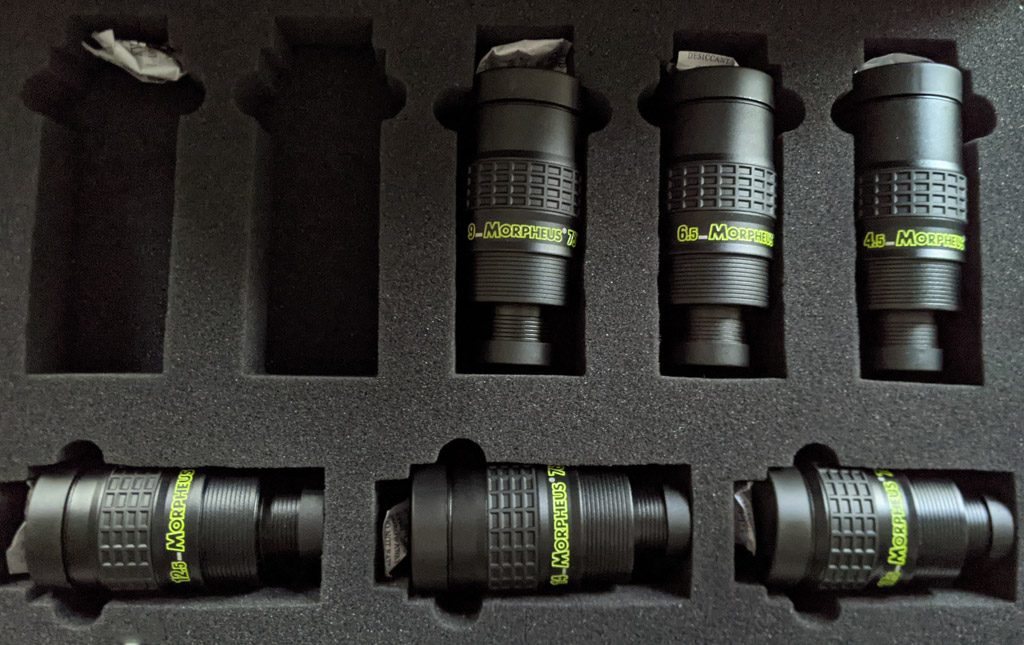