Last year when we replaced our damaged 12" Newtonian telescope with a Meade 16" LX200 telescope, we couldn't retain our beloved AstroPhysics 7" Refractor. We had nowhere to house two large telescopes. Automating mounting and staffing the StarFire required the very resources we needed for the LX200. Necessary as it was to sell our old friend, its sale was not popular among those of us who had gazed through its excellent optics for a up to a decade.

When we dismounted the StarFire from its perch at the top our cluster of telescopes, we cleaned up the outside, set aside its parts and put up a For Sale Sign on the Internet. We had inquiries from several people, but an astronomer on Long Island, Joe Castoro was the winner. Joe had owned a StarFire in the past. In site of having sold his prior StarFire, he always wanted to own another one. After a number of e-mails and phone calls, we agreed on a price and a delivery. 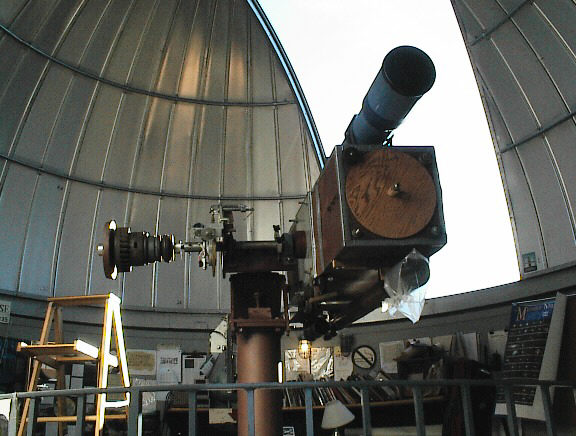 This only began the adventure however. Churning up the east coast of the United States was a large hurricane targeted on you guessed it - both Long Island and southern Rhode Island. Our first plans to meet and exchange ownership of the StarFire were delayed until the day after the storm. Being of the queasy stomach sea sick persuasion myself, I did not see how Joe Castoro would be able to survive the post storm swells, but he assured us that he would be over on the afternoon ferry boat.

My wife and I packed up the StarFire in our van and trundled off to meet the 2 o'clock ferry from Port Jefferson to New London. When we got there all we knew was Joe Castoro would be in a blue Mercury Villager. I don't know how many vans, SUVs, station wagons and the like the ferry holds, but a seemingly endless stream of them poured of the boat. I had not figured how popular blue was as a car color. However, my little sign with Joe's name seemed to work and he found us.

My request to meet someone from the ferry seemed like an innocent request until the onlookers noticed that the person to be met had a perfectly fine car of his own. We drove to the side of the lot and opened both vehicles. Something that looked a lot like a heavy piece of miltary ordenance was exchanged after careful examinations. Even from the distance the wad of money changing hands was conspicuous. Then Joe immediately drove back onto the ferry he had just left! If that didn't look suspect, then I don't what would.

Apparently, all the onlookers had been raised in the tradition of Sergeant Shultz on Hogan's Heroes. They studiously looked the other way. I could almost hear them muttering "I know nozhing ... nozhing!". I don't think any of them wanted us deploying the apparently lethal ordenance anywhere vaguely towards their direction. We for our part were glad to be taking the wad of Ulysses S. Grant greenbacks to safe keeping.

Joe told us that he planed to refurbish the telescope. What a job he has made of it too! I've seen many fine restorations in major telescope magazines which were could not match this excellent work. He repainted the barrel and dew shield with white enamel. The old 2" focuser was replaced with a larger photographic version. The tripod he has built looks like it was there from the beginning. Joe added a carrying case. When he was done, Joe proudly emblazoned the entire instrument with a logo declaring it to be a StarFire 178 (ie 7") Astro Physics telescope.

What a fine job, Joe! We wish you many happy nights of viewing! Thanks for sending us the images of our old friend and allowing us to display them on our website.

This document was authored by Les Coleman and is subject to Copyrights belonging to Les Coleman. This material may be referenced and reproduced as long as proper attribution is given as specified in Proper Usage Guidelines for Frosty Drew and Related Materials.