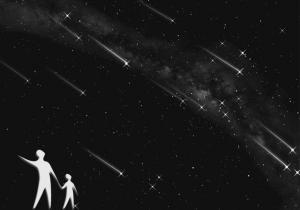 Perseid Meteor Shower 2015 - Under the Perseids

The early morning of August 13th, 2015 will bring the Perseid meteor shower peak to the skies over Frosty Drew, blazing the starscape with up to 100 meteors per hour. The Perseids are considered by many to be the best meteor shower of the year,and with only a 1% crescent Moon rising at dawn, we are lined up for an awesome night of meteor watching! Perseids will start appearing more frequently as midnight approaches, and will peak in the early morning hours of August 13th just before dawn.

Join Frosty Drew astronomers at the Observatory on August 12, 2015, weather permitting, to witness this spectacular event. We will open the Observatory and Sky Theatre at 8:30 p.m. In the Observatory, telescopes will showcase the night sky from 8:30 - 11:00 with views of Saturn, nebulae, star clusters, and galaxies. After 11:00 we will all make our way outside to view the spectacular meteor shower. We may have portable telescopes available throughout the night with some great views of deep sky objects. The Sky Theatre will remain open all night with videos and slide shows of celestial objects we have photographed at Frosty Drew Observatory.

Bring your friends and family. Break out your lawn chairs and blankets, *binoculars, and telescopes. Sit under the beautifully clear dark skies of Charlestown, Rhode Island and have a night out on the Perseids!