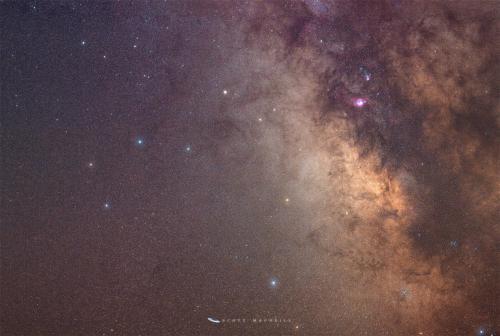 The Teapot Asterism alongside the Milky Way Galactic Nucleus in the constellation Sagittarius. Credit: Scott MacNeill

The Summer Stargazing Nights event on Friday, June 8, 2018, brought another example of how variability in weather forecasts, favor Frosty Drew Observatory. While forecasts called for partly cloudy conditions, we had practically no clouds present for most of the night, with only one or two periods of periodic clouds. This allowed for a fabulous night for Frosty Drew Observatory astronomers and hundreds of visitors that came out to celebrate the cosmos. Here are our log entries for the night. Enjoy!

Last night was a lot of fun! We had many guests who were enthusiastic and excited to be there. Three of them were student visitors from Coventry High School who were there getting extra credit for their astronomy class. The skies were clearer than expected so we had some great views of Jupiter, then later on Saturn. Many visitors who came out said it was their first time there and their first time viewing Jupiter. One little girl was thrilled that she saw 4 moons of Jupiter. 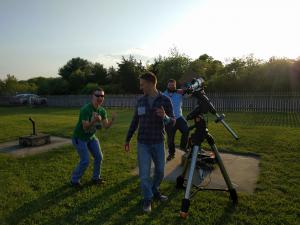 Great night, was sick, but thoroughly enjoyed it nonetheless.

Before skies darkened, wasn't sure of solar topics on which to engage the few straggler visitors. So instead just studied mostly Jupiter info and also some June sky charts. Used my own library books and also a Frosty Drew book. Which was confidence-building, in that I had several talking points for guests.

Had great convos with guests, as usual. More so tonight because I refreshed my planet knowledge a bit, and also increased my knowledge on constellations. (Never have cared about constellations much.) I also asked John for some talking points "that in his experience have elicited good reactions from the public."

Love that so many people are astro-enthusiastic enough to come wait in line, donate, and spend their night with us.

The evening started with cloudless skies, a most pleasant surprise as we were expecting a continuous stream of clouds with frequent clear gaps through which we could look at our targets. When the predicted clouds finally did appear around midnight, they only covered a portion of our northern skies. Overall, we really lucked out with the weather, and while the skies were not crystal clear (there was a bit of a haze), they far exceeded our expectations and provided a very pleasant evening of viewing. 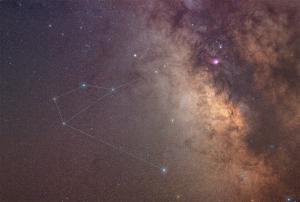 Our lawn telescopes briefly featured Venus in the west, followed by extended views of Jupiter to the southeast in the constellation, Libra. Later in the evening I operated our 16-inch telescope which was also focused on Jupiter. The planet’s equatorial bands were visible as well as the Great Red Spot. The 4 Galilean moons were also visible, three on the left and one on the right with the moon on the right, Io, significantly closer to Jupiter than the three moons on the left.

My night ended just after midnight with the asterism, the Teapot, in the constellation, Sagittarius, clearly visible above the trees to the southeast. Saturn, was perched just above and a bit left of the very top of Teapot. And the Milky Way stretched from the spout of the Teapot near the horizon to the north and the constellation, Cygnus, the Swan. Our best nights provide more vivid views of the Milky Way, nonetheless, it brought the evening to a nice close.

Our afternoon started off slow, which is expected in early June. Skies were partly cloudy when I arrived, though cleared nicely within the hour. This gave us the go-ahead to setup our hydrogen alpha telescope which showcases the solar chromosphere. The slow starts work out well for us and we use that time to talk about the night, advise and prime our new team members, as well as relax and catch up with each other before the night really takes off. 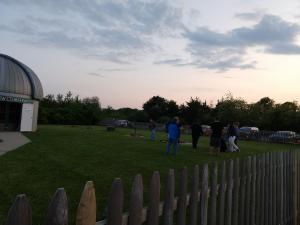 We had a surprise reunion with one of our previous summer interns, John Weaver, who attended with his friend Elisa. Together they operated the Art Guarino Telescope station. John has an astounding knowledge of astronomy and physics which is complemented by his contagiously enthusiastic demeanor and presentation style. John hails from eastern CT, and studies Astrophysics and Cosmology at the University of St. Andrews, Scotland. John has maintained an active involvement on the Frosty Drew Observatory team since 2014, when he is in the United States. He informed us last night that he will be available to volunteer as a Staff Astronomer at Frosty Drew Observatory for much of July and August this summer, and we are thrilled at that prospect!

Our visitor base was fantastic last night. Hundreds of visitors, eager to learn about the cosmos and catch their first views of Jupiter and Saturn in the telescope, descended onto the Observatory campus. Many visitors stayed for most of the night, with some catching sight of the Milky Way stretching across the sky. Among our visitors were many elementary and high school aged students, which gives me a chance to do one of my favorite things; introduce them to the concept of walking on Mars. Today’s children are faced with the amazing opportunity to be the first humans to walk on another planet, when we visit Mars in the 2030’s.

My time on the Dome Telescope Station, was largely spent on Jupiter, which put on quite a show for all. We started off with a sunset view of Io’s shadow transiting Jupiter’s cloud tops. This is essentially a total solar eclipse happening on Jupiter, that we can see from a third party perspective. At 9:00 p.m. Jupiter’s Moon, Io, emerged from the front of Jupiter, which allows us to see the moon’s disk. Twenty minutes later, the Great Red Spot rotated into view, which we observed until it transited out of view about two hours later. After 11:00 p.m. we spotted Saturn in the big telescope, with Titan, Rhea, and Dione visible. I finished off the night with a handful of awesome visitors as we observed Albireo, Messier 27, Messier 11, Messier 5, and Messier 17 – The Swan Nebula. Team member Sean Perkins and I wrapped up the night at 2:30 a.m. and skies were still clear.

Let’s hope for more nights like these this summer!