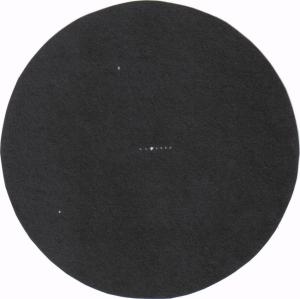 Last November, astronomers were treated to a fly-by of the near-earth asteroid 2005 YU 55. An 11th magnitude object, 2005 YU 55 raced across the sky at an astounding rate of one degree every 10 minutes. Viewing the event required a telescope of 6-inch aperture or larger.
Very rarely does a near-earth asteroid become bright enough to be seen with small backyard scopes. A notable exception is the asteroid 433 Eros. The number “433” indicates that Eros was the 433rd asteroid to be found and catalogued – the honor going to the German astronomer Carl Witt, who spotted Eros in August of 1898. Eros is normally a faint object, but every few decades it passes near enough to brighten to 7th or 8th magnitude. One of those favorable apparitions is currently underway.
Around the time of its nearest approach on January 31, Eros will be 16.6 million miles from earth - 80 times more distant that 2005 YU 55 was during its November visit. Eros’ motion, therefore, won’t be as frenetic, but you’ll detect a definite displacement in a matter of minutes, especially when Eros passes a background star.
During the 20th century, studies of Eros hinted that it might be an elongated body. In 2000, Eros was visited by the NEAR Shoemaker spacecraft, which orbited and imaged the asteroid for a year before making a soft landing on its surface. NEAR Shoemaker confirmed that Eros is indeed elongated, with dimensions of 22 X 8 X 8 miles.
Eros’ last close encounter was in 1975. It won’t be a small-scope target again until 2056, so you won’t want to miss this opportunity. For more information about the Eros encounter, refer to the February, 2012, issues of Astronomy (pages 48 and 49) and Sky and Telescope (page 52). For a printable finder chart, log on to http://media.skyandtelescope.com/documents/WEB_Feb12_Eros.pdf.