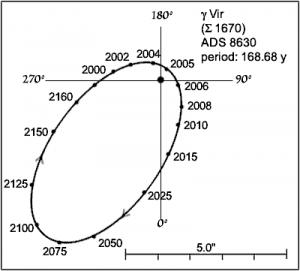 Compiling a list of the finest double stars for backyard telescopes is always a work in progress. The list is forever in flux, because many showpiece double stars are binary systems that periodically close to the point where they can’t be resolved by small-aperture telescopes.

Such is the case with Porrima (gamma Virginis). In 1970, a compilation of the finest double stars would have included this striking pair of nearly identical magnitude 3.5 spectral class F0 stars. Back then, these stellar twins were separated by 4.6”, an easy “kill” for the smallest of telescopes. The situation changed rapidly as the two stars began to close together. Between 2002 and 2007, they were within an arc-second of each other – all but impossible to resolve with anything but the largest telescopes. Porrima disappeared from the double star A-List.

A comeback is in the works! Porrima A and B are separating and are nearly 2” apart – within the grasp of a good 3-inch scope under seeing conditions that permit a steady image at a magnification of 120X or more. Saturn is currently visiting Porrima’s neighborhood. If the Ringed Planet is sporting an unusually crisp image, try your luck with Porrima.

I found an amazing Youtube clip of Porrima, taken by the North Carolina astroimager Michael C. Phillips through his 14-inch f/4.5 Newtonian reflector.