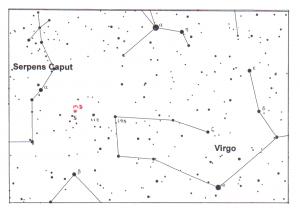 Much astronomical hoopla has been made about the June 5th Venus transit – and rightfully so. But what happens after that, when post-Venus Transit Depression sets in? I can’t think of a better cure than a telescopic trip to the globular cluster M5.

M5 was discovered by the German astronomer Gottfried Kirch in 1702 – more than 60 years before Charles Messier observed and recorded it in his Catalog. It ranks as one of the finest globular clusters visible from mid-northern latitudes and is a worthy rival of M13 in visual splendor. Its brightness (magnitude 5.7, just visible to the unaided eye), apparent size (17.5’), and distance (25,000 LY), mirror those of M13.

Why, then, does M13 garner more attention? The answer is location. M13 is conveniently placed between the stars zeta () and eta () in the “Keystone” of Hercules. M5, on the other hand, lies in a relatively star-poor part of Serpens. One of the easiest ways to find M5 is by tracing a line from 109 to 110 Virginis and extending it an equal distance beyond to the star 5 Serpentis (refer to the finder chart). M5 is in the same low-power field as this star, just 0.4o to its northwest.

Like M13, M5 is one of the few globular clusters that can be resolved with small scopes. Through an Edmund Astroscan, M5 looked to me like a circular glow interspersed with faint stellar specks. The effect was especially noticeable when I viewed M5 with averted vision. With large-aperture scope, M5 is nothing less than spectacular – a rounded mass comprised of thousands of stars of 12th to 15th magnitude. I say “rounded,” but some observers describe M5 as being slightly elongated in a NE to SW direction. See if you agree.