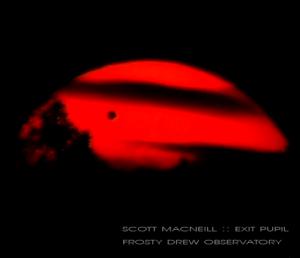 On June 5, 2012 we setup our telescope, cameras, streaming servers, projectors, and monitors to view the event of the century. The last transit of Venus we will ever see.

This final Transit of Venus in our lifetime is now past. We were diligent in waiting for our last chance to view this event through the usual extensive cloud cover that has become the everyday norm for New England. As the last minutes of daytime started to fade a small break in the clouds approached our western horizon and for 5 minutes the Sun became visible allowing us to see the fantastic disk of Venus transiting the disk of the Sun. About ten people remained to witness this event and all were mesmerized as we watched Venus and the Sun set below the tree tops racing towards the western horizon.

Camera's were rolling and shutters where clicking away in a desperate attempt to catch a snapshot or video of this final transit. Though not all photographic data has been processed yet, I was able to grab a couple screen-shots from a video that we captured.

Additionally I was able to create this time-lapse video from images captured by my camera:

We will be posting noteworthy videos on our <a href="/events/transit.of.venus/streams/" title="Transit Video Archive">Transit Video Archive</a> as well as photos that we had gotten of the transit to our <a href="/media_galleries.dc/show/entry-689/pss-obsy/" title="Transit of Venus 2012 Photo Gallery">Transit of Venus 2012 Photo Gallery</a>. Those who purchased eclipse shades, keep them in a safe spot where the black polymer will not get scratched or damaged. These glasses can be used to safely observe the Sun including sunspots and solar eclipses. Quite a valuable item to have!

A special thanks goes out to Tom Abbott who's charm and resourcefulness made yesterdays clouded out event fun and informative for all who came out with high hopes. Also to Ernie Evans who loaned Frosty Drew Observatory his custom security camera so we could display the live video stream on our projectors and monitors as well as record the transit. You guys are AWESOME!

We will see you all in December 2117 for the next Transit of Venus!