Sky Object of the Month - The Lunar X and V 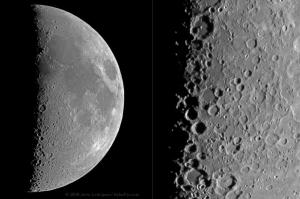 The moon – what a royal pain in the butt! For a week or so around its full phase, the moon floods the nighttime sky with a natural form of light pollution, frustrating experienced backyard astronomers who try in vain to view faint deep-sky objects. Its only value, they claim, is to the novice skygazer who seeks an easy target for his or her first telescope.

We need to rethink that attitude. Like it or not, the visual splendor of the moon far exceeds that of the finest Messier and NGC objects. It’s much more than just a “cosmic playpen” for the beginner or a stagnant “been there, done that” object. In fact, a number of serious amateur astronomers religiously observe and study the moon. To them, the moon is a world replete with thousands of intricate features that constantly change in appearance as sunlight wends its way across the lunar surface.

Some of the more intriguing lunar sights are transient features - short-lived phantoms formed by shadows cast by crater rims or by high-altitude areas capturing the glint of the rising sun. Many of these occur near the lunar terminator. One of the most remarkable is the “Lunar X” which appears around the time of first quarter moon. I first learned about the X while reading Philip Harrington’s book Cosmic Challenge. It results when light from the rising sun first strikes an elevated area formed by the conjunction of four craters near the crater Werner.

Harrington’s write-up included a timetable of Lunar X appearances. Tipped off by this information, I decided to see the Lunar X for myself. Peering into the eyepiece, I was amazed at how readily visible the X was. How had I missed it? How, for that matter, had legions of other amateur astronomers failed to see it, or at least announce its existence? Although it appears on a number of early lunar photographs, the Lunar X wasn’t formally introduced to the public until 2004 when it was described by Canadian amateur astronomer David Chapman in an issue of SkyNews Magazine. Perhaps the Lunar X was lost in the overwhelming amount of detail the first quarter moon presents.

The accompanying photograph shows the location of the Lunar X (look about one third of the way up from the lunar south pole). This month, it will be visible on the 25th for several hours centered on 6:34pm. Lunar X will again appear on Sep 22 at 5:46pm and Nov 20 at 9:25pm. By coincidence, another letter appears near the terminator at the same time as the Lunar X. Can you spot it?