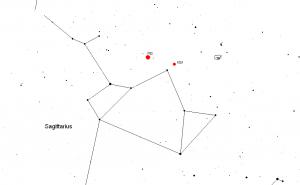 What’s the most spectacular globular cluster in the northern sky? Most backyard astronomers would pick the Great Cluster M13 in Hercules. If you wish to view the finest globular cluster visible from the entire New England sky, however, you’ll have to travel south of the celestial equator to the constellation Sagittarius and its showpiece globular cluster M22.

M22 outclasses M13 in a number of categories. It’s brighter (magnitude 5.1, versus 5.6), larger (24’ to 16’), and more readily resolved. I viewed both with a 4-inch f/4 RFT (Edmund Scientific’s Astoscan) at 75X, and M22 showed more of a sprinkling of stars. I also noted that it seems somewhat elongated.

Truth be told, M22 has an unfair advantage over M13. At a distance of 10,000 light-years, it’s over two times nearer to the earth than M13. In reality, M13 is a giant whose 140 light-year diameter and population of some one million stars are twice those of M22.

The reason M22 is overlooked in favor of M13 is its far-south location (-24o declination) and its presence in a cluttered region of the Sagittarius Milky Way. Nevertheless, M22 is relatively easy to find. In binoculars or finderscopes, look for a fuzzy ball 2 ½ o NE of lambda () Sagittarii (the top star in the lid of the Sagittarius “Tea Pot”). If you’re in a dark-sky region, you might even be able to spot it with the unaided eye. The accompanying finder chart shows the location of M22, as well as the position of the neighboring globular cluster M28 (mag 6.9, size 11’).

An interesting story surrounds the circumstances of M22’s discovery. Most sources attribute the discovery to the little-known German astronomer Abraham Ihle in 1665. In his classic 1844 guide Cycle of Celestial Objects, Admiral William Henry Smyth opines that the spelling of the last name may have been in error and the true discoverer was likely the English astronomer Abraham Hill. It’s possible that the German-Polish astronomer Johannes Hevelius saw M22 even earlier.

Be sure to put M22 on your must-see list this month, especially if your summer plans include a visit to the Stellafane Convention in Springfield, Vermont. It should be an astonishing sight in those clear Green Mountain skies, particularly through one of those large-aperture Dobs that appear on Breezy Hill during Stellafane weekend.