“The Coathanger” – Asterism in Vulpecula 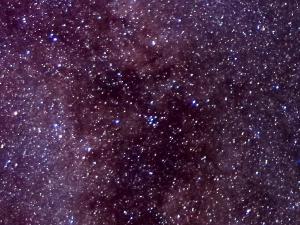 If you slowly scan the southern part of Vulpecula (the lower left part of the accompanying finder chart) with binoculars or rich-field telescope, you’ll come across a remarkable asterism comprised of 10 stars arranged in the distinct form of a coathanger. Six line up to form the bar, while four others create the hook. It’s quite an eye-opening sight!

The Coathanger was seen as a nebulous spot in 964 AD by the Persian astronomer Al Sufi and was rediscovered by the 17th century Italian astronomer Giovanni Battista Hodierna. Because of its large size (a 1 ½ o span), the Coathanger wasn’t included in the catalogs of Messier, Herschel, or the NGC. In the 1920s, the American amateur astronomer Dalmiro Brocchi sketched it in a finder chart for the American Association of Variable Star Observers (AAVSO). Since then, the Coathanger has been popularly known as “Brocchi’s Cluster. Its formal identity on most star atlases is Cr 399, the 399th entry in a 1931 catalog of star clusters produced by the Swedish astronomer Per Collinder. Surprisingly, the Coathanger Cluster isn’t a true star cluster at all, but a chance alignment of stars ranging from 200 to 1100 light years away.

Before leaving the Coathanger, get out your telescope and train it on 7 Vulpeculae – the easternmost star in the Coathanger. Less than a degree to its east is NGC 6208, a 9th magnitude open cluster that spans about 3 arc-minutes. In small scopes, NGC 6802 appears as a faint, slightly elongated smudge. In larger instruments, you’ll see what Walter Scott Houston described as a “delicate splash of celestial fire.”

In his “Binocular Universe” column for the Cloudy Nights website, Phil Harrington features the Coathanger and NGC 6802. You’ll find it at http://www.cloudynights.com/item.php?item_id=2026.