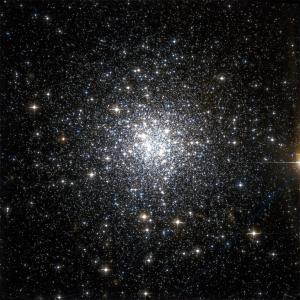 October sees the demise of the summer Milky Way and its swarm of globular clusters centered on the constellation Sagittarius. A few, notably M15 in Pegasus, lag behind to grace our autumn skies. Another of these stragglers is NGC 6934 in Delphinus. This small 9th magnitude globular was discovered by William Herschel in 1785. In early star atlases and in modern-day “Herschel 400” guides, it bears the designation H1031 - the 103rd entry in Category I (bright nebulae) of Herschel’s deep sky catalog.

NGC 6934 may be glimpsed in small scopes. In fact, my only encounter with this globular was with a 3-inch f/10 reflector through which it appeared as a “faint patch of light, but definitely identified.” The circular smudge was only a few arc-minutes across and lay just east of a 9th magnitude star. My observing guides, including Kepple and Sanner’s The Night Sky Observer’s Guide, indicate that resolution will require more substantial instruments – 8 to 12 inches for partial resolution of the outer halo, 14 inches or more combined with high magnification for a more definitive view. To that end, my October “to-do” list includes a study of NGC 6934 with medium and large-aperture telescopes. Anybody have an 18-inch Dob handy?

The finder chart, from the Touring the Universe with Binoculars Atlas (TUBA) by Phil Harrington shows the location of NGC 6934. Owners of GoTo scopes or traditional equatorially-mounted instruments can lock it in using the coordinates 20h 34.2m, +07o24.2’. Star hoppers will want to try the 4 degree trek southward from epsilon (ε) Delphini. Harrington 9 (Hrr 9) is an asterism he found that surrounds and includes the star theta (θ) Delphini.