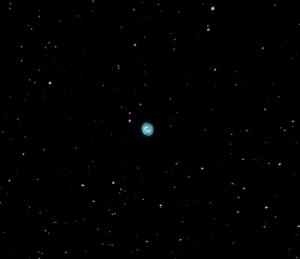 What could be a more appropriate telescopic destination for a wintry night in January than the “Blue Snowball?” More formally known as NGC 7662, the Blue Snowball is a beautiful planetary nebula located in Andromeda. Discovered by William Herschel in 1784, it sports as the nickname implies a circular form and eye-pleasing bluish hue.

To capture NGC 7662, point your telescope towards the Y-shaped asterism known as “Frederick’s Glory” - a quartet of 4th and 5th magnitude stars in the northwest part of Andromeda (look in the upper right-hand corner of the accompanying finder chart). From iota (ι) Andromedae (the base of the Y), move 2 degrees westward until 6th magnitude 13 Andromedae is centered in the finderscope field. With your telescope and an eyepiece that captures a chunk of sky at least a degree across and magnifies 40X to 50X, scan the surrounding area. If you spot what appears to be a tiny out-of-focus star about one-half degree to the southwest of 13 Andromedae, you’ve found NGC 7662.

An 8th magnitude object with an apparent diameter comparable to that of Saturn, the Blue Snowball can be viewed with telescopes of all sizes. I’ve glimpsed it with a 3-inch f/10 reflector and magnifying power of just 60X. Its dazzling hue and intricate detail mandate larger telescopes and magnifications exceeding 200X. Whether you own a common 60mm refractor or a huge Dob, look for the Blue Snowball on the next clear January evening.