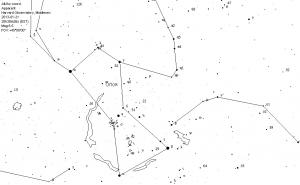 This month, we travel 16.5 light years to the remarkable triple star 40 Eridani (aka Keid and omicron2 Eridani). This system merits must-see status by virtue of the fact that one of its members is the most easily-seen white dwarf in the night sky. Trekkies would add that the primary, a K1 dwarf not unlike our sun, is orbited by the planet Vulcan - homeworld of the starship Enterprise’s first officer Spock.

A small-aperture telescope and magnification of 50-60X shows two stars – the yellowish 4th magnitude primary (designated 40 Eridani A) and a faint 9th magnitude companion (40 Eridani B) some 83 arc-seconds away. This ordinary-looking speck is a white dwarf with half the mass of the sun packed into a body whose diameter is only half again that of the earth. One cubic inch of its matter would weigh 4 tons!

The white dwarf has a companion of its own, located about 9 arc-seconds away. Discovered by William Herschel in 1783, 40 Eridani C is an 11th magnitude main sequence red dwarf which can be glimpsed with a 6-inch telescope and magnification of 150X or more. Viewed with a large-aperture Dob, the colors – yellow for A, white for B, and pale red for C – are amazing!

40 Eridani B and C are separated by an average distance of 35 Astronomical Units (slightly less than the gap between the sun and Neptune) and orbit each other in a 252 year cycle. They lie 400 Astronomical Units (about 37 billion miles) from 40 Eridani A, circling this star in a period estimated to exceed 7000 years.

You may not have the starship Enterprise to transport you to the 40 Eridani star system, but a good backyard telescope will put you in the neighborhood. Would you like to get even closer? A wonderful piece of artwork by Andrew Taylor takes us to the surface of a planet (Vulcan, perhaps?) orbiting 40 Eridani A. .