Messier 104 – the “Sombrero Galaxy” in Virgo 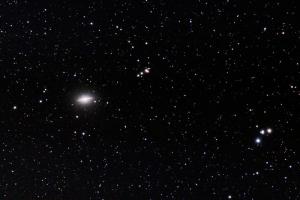 One of the more noteworthy examples of an edge-on spiral galaxy bisected by a dark dust lane is M104, the Sombrero Galaxy. The nick-name arises from the galaxy’s resemblance to the traditional Mexican headwear, the bright nuclear bulge forming the hat and the spiral arms/dust lane the wide brim.

Although M104 is located in Virgo, the best launch point for a star-hop is from the 3rd magnitude star delta () Corvi (refer to the accompanying chart). About 2½ degrees north and slightly east of delta is a one degree long arrowhead outlined by a trio of 5th and 6th magnitude stars. The arrowhead points to M104, about 2 degrees further northeast.

At 8th magnitude and possessing a high surface brightness, M104 can be glimpsed in binoculars on a clear moonless (a dark-sky location helps). A small-aperture scope reveals its elongated 8’ by 4’ shape. The visibility of the dust lane is dependent on telescope aperture and sky transparency. From regions of truly dark skies, it can be glimpsed with a 4.5-inch telescope. If you live in a suburban area with light-polluted skies, you’ll need an 8-inch or larger scope. Even then, the dust lane may be an averted vision feature. The Sombrero Galaxy is one deep-sky object that fairly screams for ultra-dark skies and wide aperture!

If you view the Sombrero with a wide angle eyepiece that magnifies 75X or more and captures a 1½ degree field, you’ll see two interesting stellar groupings to the west. The first is a hockey stick shaped arrangement of four 8th magnitude stars that forms the teeth of the shark-shaped asterism Jaws. Further west and slightly south is an amazing triangle-within-triangle arrangement called the Stargate. Visible in small aperture scopes, it’s a stunning sight in large instruments.

M104 was discovered by Pierre Mechain in 1781 and independently by William Herschel three years later. Estimates of its distance vary, with recent findings hinting at about 30 million light years. In diameter, it’s roughly half the size of our Milky Way.