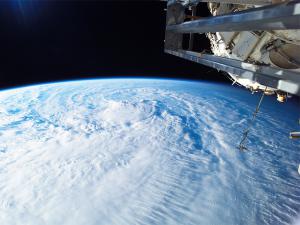 This coming week the summer solstice will happen marking the start of summer, the first quarter moon will take place this weekend as we progress towards the full moon later this month, and the International Space station has added a live video and audio stream showcasing life on the space station. Another week of exciting celestial happenings.

As we move through spring and into summer you probably have noticed that our stargazing session is starting quite late, usually around 9:00 p.m. This is common during this time of year as the sun approaches its highest point in our sky known as the “summer solstice”. Next Friday (June, 21) at 1:04 a.m. EDT the summer solstice will take place marking the start of the summer season. On this day the sun will rise at 5:18 a.m. and set at 8:18 p.m. making it the longest day of the year. This happens because the Earth, which is tilted 23°, will be most inclined in the northern hemisphere towards the sun. While we move through these months surrounding the summer solstice, come out to Frosty Drew for views of the sun every Friday afternoon starting at 6:00 p.m.

Have you ever thought about life and the challenges (and awesomeness!) of living on the International Space Station (ISS)? Chris Hadfield, a Canadian Space Agency astronaut and commander of the recently completed Expedition 35, really brought a practical view of life on the ISS to the earthbound population. His frequent tweets and YouTube posts (usually answering questions about demonstrating every day activities without gravity) have really shinned on the already super popular ISS. Continuing the popular practice of bringing ISS life to all of us here on Earth, NASA has setup a continuous LIVE video and audio stream from the station. This live stream displays internal views when the crew is on-duty and Earth from 230 miles up at other times. When available, audio conversations between the crew and mission control will accompany the video. With the ISS orbiting the Earth once every 90 minutes and experiencing a sunrise or sunset every 45 minutes there will be frequent loss of signal periods which will produce a brief blue screen. Wait it out because awesome views of crew activity, Earth (so sexy!), lightning, aurora borealis, and beautiful sunrise / sunsets from space abound in this fantastic addition to the station that tells the story of human exploration, perseverance and strive for excellence!

Keep looking up as awesome things are happening all the time as we move further into the space age!