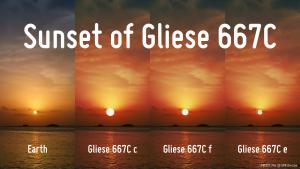 This past week many awesome things space has happened. Among many, NASA launched a new solar observatory to help further unravel the mysteries of the closest star to Earth. Three planets capable of supporting alien life were found around the same star! Unfortunately it looks like the summer fog we have had the past year may be returning to Frosty Drew. NO!!

Last Thursday night (June 27, 3013) NASA's new solar observatory successfully launched into space. The Interface Region Imaging Spectrograph (IRIS) will now start its two year mission to understand how heat and energy move through the lower levels of the solar atmosphere. Using high-resolution images, data, and computer models; IRIS will unravel how matter, light, and energy move from the sun's 6,000°k surface to its 1,000,000°k outer atmosphere called the corona. This area has been notoriously hard to study and IRIS will offer a new view into this mysterious solar region.

This past Tuesday (June 25, 2013) an international team of scientists studying exoplanets announced the identification of three potentially habitable planets around the star Gliese 667C. This star is the smallest star of a three star system that resides 22 light years away toward the constellation Scorpius. Aside from the three planets capable of supporting alien life, three other planets have also been identified bringing the solar system planetary count to six known planets with the possibility of a seventh. The three habitable worlds are more massive than Earth but less massive than Neptune, and all reside in the region around their parent star where temperatures are capable of sustaining liquid water on planetary surfaces. This is the first time three low-mass planets have been identified in the habitable zone of the same star system therefore significantly increasing the potential number of habitable planets that may exist in our galaxy.

The past few nights we have had a tough time getting a look at the sky. Hopefully the weather of the past three summer seasons does not take shape. Last summer we had only one night of observation at Frosty Drew Observatory for the entire season due to weather. Summer is a great time for observation with warm nights, no school, and the brighter arms of the Milky Way visible overhead. If the New England weather moves back into attack mode and keeps Frosty Drew closed, be sure to make use of other great observing opportunities in the greater Rhode Island area. Seagrave Observatory (http://www.theskyscrapers.org/) is open for free to the public every Saturday night (weather permitting) from 9:00 – 11:00 during the summer months. Additionally, starting July 16th, Ladd Observatory at Brown University (http://www.brown.edu/Departments/Physics/Ladd/) will be open to the public free of charge from 9:00 – 11:00. Don't let the weather prevent you from getting your astronomy fix on!