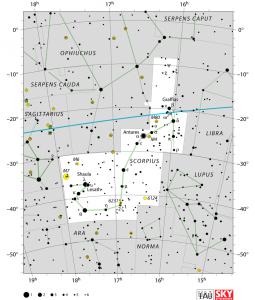 Find M:80 in the constellation Scorpius

From last month’s featured object, the challenging double-double nu (ν) Scorpii, we dip 4 arcminutes south and slightly east to a point roughly midway between Antares (α Scorpii) and Graffias (β Scorpii). The small 7th magnitude fuzzball we encounter when viewing this area with binoculars or low-power rich-field scope is the globular cluster M80.

M80 was discovered on January 4, 1781, by Charles Messier, who wrote, "The nebula is round, the center brilliant, and it resembles the nucleus of a little comet, surrounded with nebulosity." William Herschel observed M80 four years later and called it "one of the richest and most compressed clusters of small stars I remember to have seen."

This compression is obvious, even when M80 is viewed with small telescopes. In the spring of 1971, despite being an inexperienced backyard astronomer and using a modest 3-inch reflecting telescope and magnification of just 30X, I easily noted its "small and condensed" appearance. More recently, I returned to M80 with a 4.5-inch f/8 reflector and a boost in magnification to 150X. Despite this jump in aperture and magnifying power, I was still unable to resolve any cluster members. No surprise, because M80 – at least its core – is all but impossible to resolve. The outer region appears grainy when viewed with medium to large aperture scopes.

Most sources cite a distance to M80 of between 28,000 and 36,000 LY. Crammed within its 95 LY diameter are several hundred thousand stars. Herschel was right. M80 is truly one of the densest globular clusters in the Galaxy.