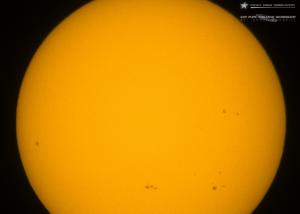 One problem all Rhode Islanders share is constantly hearing our beloved state referred to as a unit of measurement. Rhode Island natives learned in the hallways of elementary school from classmates speaking in hushed tones that 257 Rhode Islands’ fit into Texas or that 634 fit into Alaska. Sure, some learned other things in class, but these are not remembered quite as well.

I tell you this because in today’s day and age, we are implored to think globally and act locally. Okay. That’s easy. The acting locally part is visiting Frosty Drew Observatory or any other local Rhode Island Observatory open for public viewing.

Don’t like summer heat waves? Consider this: the temperature at the core of our Sun is about 29 million ̊ F (16 million ̊ C.) Temperatures at the surface are a balmy 9,900 ̊ F (5,500 ̊ C.) Really? Earth bound fire fighters routinely enter burning infernos of 1,100 ̊ F (593 ̊ C) to save life and property. Disgruntled restaurant customers burn their palettes on hot beverages a lot cooler than that, and routinely sue the restaurant! Man that gets me hot under the collar.

And, then there are those sunspots to consider. Sunspots are funny things. The sunspots that you see on the projected image of the photosphere (surface) of the Sun at Frosty Drew are quite large. An average sized sunspot is about the same size as the Earth. There we go again, thinking globally. They are cooler than the adjacent surface of the Sun. They travel slowly across the Sun in groups. They are on an 11 year activity cycle and we are approaching that maximum activity very shortly. Also, they are magnetized. And, just for good measure, they change their polarity every 11 years. What was north becomes south and vice-versa. Amateur astronomers record and track them and contribute greatly to scientific knowledge. When you think about it, sunspots are really awesome.

Still, I have a gripe with sunspots. They disrupt communications on earth and do other dastardly deeds. For instance, 1970’s CB radios were a great thing while traveling on the highway. Hugh convoys of cars and trucks would form, their drivers all chiming in and talking to each other. You could acquire a funny handle. Everybody and his brother rushed out to get a CB radio. A popular song was recorded about this mass hysteria. Sadly though, CB radio popularity diminished after a time. Why? Among other reasons, sunspot activity interfered with the transmission of their radio waves over long distances. As with the dinosaurs, who got dumped on by an asteroid (a subject for a future column), the Universe had its say. Many a grown man cried, but hey, look at it this way, we still have the song: Convoy, And, happily, some still have the memories.

So in closing, a friendly reminder: our beautiful Sun, spots and all, can safely be seen from Frosty Drew starting at 6pm throughout the summer. Yep, you guessed it: acting locally.

Come on down! I’ll see you there!

Mark Sweberg
Your comments on this column are welcome. E-mail me at mark.sweberg@gmail.com