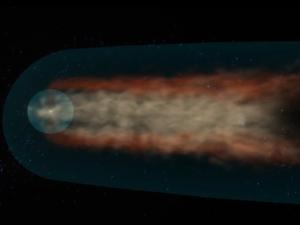 This summer the skies have taken a huge turn for the worse. After the fantastic observing conditions this past spring, we were really hoping for a great summer. Fear not, New England kicked back into craptastic mode and we are back into endlessly cloud laden nights. Regardless of the New England weather, some really great things are happening outside of our atmosphere.

This past Wednesday, June 10, a paper was published in The Astrophysical Journal describing in detail a tail that the Sun leaves in its wake as we travel across the interstellar medium though the galaxy. Thanks to ground breaking work being done by the NASA Interstellar Boundary Explorer (IBEX), the boundaries of the tail of the heliosphere have been mapped. This is something that has never before been possible. The tail, similar in thought to what you would see behind a comet, is created by the solar wind (charged particles that leave the sun's corona at escape velocity) blowing out of the sun in all directions. The particles that make up the solar wind travel far past the outer planets, eventually slowing down and falling into the solar system's wake, due to an influx of interstellar material at the edges of the heliosphere. This tail, called the “Heliotail” is the sun's (and solar system's) foot print on the Milky Way galaxy. Go IBEX!

This past month, the Mars Science Laboratory rover, Curiosity, was able to capture a time-lapse video of one of Mars' moons rising. Mars has two moons, Phobos and Deimos, both which are small and rather rough around the edges when compared to the nice smooth circular shape of Earths moon. Due to popular demand, Curiosity turned its navigational camera to the sky and snapped a bunch of photos of Phobos rising. Phobos has an orbital period of 0.3189 Earth days, is larger than Deimos – making it Mars' largest moon, and appears to a Mars bound viewer as a bright moving star. To view the super cool video of Phobos rising visit: http://youtu.be/dNN8SSmrN5o

The skies this summer have been a disaster, similar to what we experienced last year. Lets hope for a clearing soon as I surely miss looking at those stars.