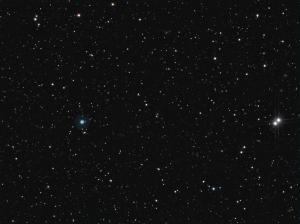 Backyard astronomers are familiar with the tactic of using averted vision to capture faint detail in deep-sky objects. A sideward glance allows photons to fall on the light-sensitive region of the retina, rendering the invisible visible. The effect of averted vision is particularly dramatic when the telescopic target is NGC 6826.

This 9th magnitude, 25 arcsecond-wide planetary nebula is dominated by a magnitude 10.6 central star. Gaze directly at NGC 6826, and all you see is the central star. Look to the side, however, and a bluish shell surrounding the star pops into view. Return your gaze to the central star, and the nebula disappears. Here is a deep sky object that does something!

This remarkable planetary nebula was discovered by William Herschel in 1783. The first documented description of the blinking effect seems to have come from James Mullaney, who described the phenomenon in the August, 1963, issue of Sky and Telescope and coined the nick-name “Blinking Planetary.”

Although NGC 6826 is visible in a modest 2.4-inch refractor, the blink effect is best-seen with medium-aperture scopes. Last September, I viewed NGC 6826 with 4-inch and 10-inch reflectors and noted: “Located near a pretty double star (16 Cyg). Unable to detect "blinking” illusion with the 4-inch. With a 10-inch Dob and 6mm eyepiece (208X), blinking effect obvious but not immediate unless I stared at the nebula for several seconds. When I did, the nebulosity faded until just the central star was visible. A quick sideward glance and "voila," the nebula reappeared."

16 Cygni, located just one-half degree west of NGC 6826, is a striking twin system consisting of magnitude 6.0 and 6.1 G-type stars separated by 39 arcseconds. Double star and planetary nebula can be captured together in a low-power field. Don’t go too low, however. With magnifications of 25X or less, NGC 6826 appears starlike and may elude detection.

As telescope size increases, the blinking affect lessens because a large-aperture instrument begins to reveal nebulosity even when NGC 6826 is viewed head-on. If your scope is too big to make NGC 6826 blink, try your luck with its FLIERs. In her book Deep-sky Wonders, author Sue French invites users of medium- to large-aperture telescopes to look for a tiny bright patch at each end of the planetary’s long axis. Each is a so-called FLIER (Fast Low-Ionization Emission Region) – an enigmatic feature possibly caused by the interaction of material being ejected by the central star with gases already in the shell.