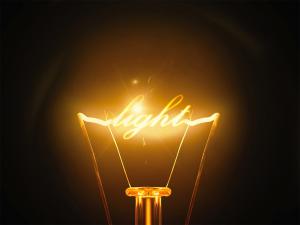 Light is awesome. It’s something we take for granted every day; we certainly don’t stop and think about it often or try and define it. Let’s give light its due and take a few minutes to understand some things about it.

Simply stated, light is nature's way of transferring energy through space. Light acts like a wave, yet has particle-like properties too. Light can be thought of as familiar ocean waves. Think about this for a second. Ocean waves are disturbances, ripples on the water, and they possess a certain height (amplitude), with a certain number of waves rushing past you every minute (the frequency). They all move at a characteristic speed across the water (the wave speed). Notice the distance between successive waves? That's called the wavelength.

Now, envision the ocean wave as a wave of light hurtling through space. The wave speed of a light wave is simply the speed of light. Coolly, different wavelengths of light appear as different colors! Physicists classify light waves by their energies (wavelengths). Labeled in increasing energy, we can draw the entire electromagnetic spectrum as shown in the figure below:

When we look at the Universe in a different "light", i.e. at "non-visible" wavelengths, we probe different kinds of physical conditions -- and we can see new kinds of objects!

When we consider the vastness of space, the mind becomes overwhelmed. Measured in light years, the closest star to us after our sun, Proxima Centauri,
is 4.22 light years away. The nearest galaxy, the Canis Major Dwarf Galaxy is 25,000 light years from the Sun. The furthest galaxies we have been able to find to date are 13 billion light years away from us. And, don’t forget; multiply these figures by 6 trillion and you’ll get the truly unfathomable distances contained in the Universe.

Looking out at the nighttime sky is akin to looking back into time. The objects are so far away in terms of miles that light coming from them literally takes tens of thousands of years, and more, to reach us. Light from an object 10,000 light years away was first emitted from that object 10,000 years ago and is just now reaching us. That object may not, in fact, exist anymore!

In the time it took me to write this in my home study at night by a window, the light from the glow of my computer screen would have traveled
1,320,000, 000 miles.

I’ll wrap up with that thought and walk to the kitchen about 10 feet away and enjoy a bedtime snack! But first, I’ll turn on the light.

Your comments on this column are welcome. E-mail me at mark.sweberg@gmail.com