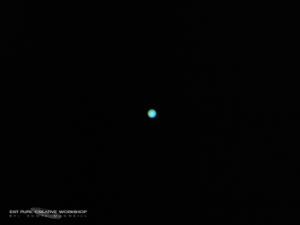 Our solar system's eighth and outermost planet Neptune reaches opposition on August 27, meaning that it is at its nearest position to us and therefore this is the best time of the year to observe it. Technically speaking, an opposition is when Earth comes into line between the Sun and an outer planet rather than the other way around since Earth orbits faster than any of the outer planets.
For the past several years, Skyscrapers has been offering views of the ice giants Uranus and Neptune during our weekly Saturday night observing programs because most people rarely see these faraway yet fascinating worlds. While not visible to the naked eye, they are easily seen in the smallest of telescopes and even binoculars if you know where to look. Included with this article is a sky map showing the position of Neptune each week on Saturday night.

Throughout late summer and autumn of 2013 Neptune is situated within the triangle formed by Ancha (theta Aqr) to the north, sigma to the east and 38 Aqr to the west. This triangle can be found eight degrees south of the "water jar" asterism of Aquarius (see finder charts).

Sunlight reflected from Neptune is absorbed by methane in the planet's upper atmosphere, giving it a distinct bluish hue that appears as an 8th magnitude "star" among the background stars of Aquarius throughout 2013.  Although Neptune's 49,100 kilometer diameter is almost four times larger than Earth's, the outer ice giant exhibits an apparent diameter of only 2.3 arcseconds at its closest distance of 28.97 astronomical units (4.33 billion kilometers). Due to this fact, Neptune does not present much in the way of detail from Earth-bound observers.
While you cannot expect to see much more than a tiny blue sphere while observing Neptune, you may be challenged to try to spot its largest moon Triton, shining at magnitude 13.5. Triton was discovered in 1846 (the same year as Neptune) and is the 7th largest moon in the solar system. A skilled observer using a 12-inch or larger telescope under optimal sky conditions should be able to spot Triton orbiting within 18 arcseconds of Neptune. If you do not have access to a large telescope but do have some experience in astro-imaging, you may try to detect Triton with your camera. The trick is to use a long focal length to separate Neptune and Triton as much as the steadiness of your tracking mount will allow.  Triton's orbit is inclined such that it will appear at least 10 arcseconds from the planet throughout its 5.88 day orbit. There is a reference diagram on page F50 of The Astronomical Almanac or you can use Sky & Telescopes Triton Tracker to find it's current position.

Neptune gets a visit from Comet 154P/Brewington during the second week of September. The comet passes within 30 arcminutes of Neptune on the 12th, during which time the comet is expected to be as bright as 12th magnitude, but you will probably want to wait until the Moon sets around midnight before trying to spot it.
Neptune was in the news recently for its newly discovered fourteenth moon. This small moon is estimated to be about 20 kilometers wide and orbits Neptune at a distance of 105,000 kilometers, giving it an orbital period of 23 hours, placing it well inside the orbit of Triton.

Good luck in your hunt for Neptune. Next month we will find Uranus.