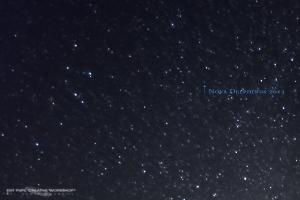 As summer starts winding down and the new school semester looms on the horizon we start gearing up for my favorite season, Autumn. Though leaf peeping anxiety and early autumn haunts are brewing, we still have a good chunk of summer ahead as well as some really great happenings in the sky. Even though we have cloudy skies in New England blocking our view, there is and ample supply of awesomeness on the other side just waiting for attention.

In the next couple weeks, NASA is go to launch the next lunar mission. The Lunar Atmosphere and Dust Environment Explorer (LADEE) is on track to launch on September 6. LADEE's primary objective is to study the super thin lunar atmosphere (called a “surface boundary exosphere”). These types of atmospheres are quite abundant in the solar system. Considering we know little about exospheres, the Moon is really a convenient place to study one. Additionally, LADEE will be the first spacecraft to utilize a brand new laser communications device that will enable two way communications at more than six times the data rate we have today using 25% less power than current radio communication methods. If successful, this new method of spacecraft-to-Earth communications will enable deep space probes and spacecrafts heading further out into the solar system to possibly send video and high-resolution images back to all of us media junkies here on Earth.

Since the Perseid meteor shower peak, a fascinating new event has been taking place in the night sky. In the constellation Delphinus (the dolphin) a Nova is occurring that has been named “Nova Dephini 2013”. A likely cause of a nova is when a small white dwarf star in a binary system robs material and energy from the partner star. Over time this energy thievery will result in a massive outburst called a nova. Unlike a super-nova, novas do not destroy the star. Nova Delphinus was first identified on August 14 and was quite dim. Shortly after, between August 18 and 19, the nova flared up to a rather bright magnitude 4.5 which is quite visible to the naked eye over Frosty Drew Observatory. Since Wednesday, Nova Delphinus has started to dim slightly and will likely become to dim for naked eye viewing in the next day or so. The constellation Delphinus is located just East of the Summer Triangle asterism. Ask a Frosty Drew staff member to point out Delphinus and the location of the Nova. If anybody snaps a photo of Nova Delphini be sure to post on the Frosty Drew Observatory Facebook page (http://www.facebook.com/FrostyDrewObservatory).

Keep those eyes on the sky as we are moving into a great time of year to be looking up!