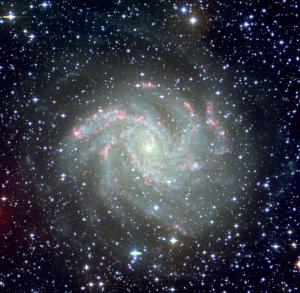 Most sources assign to NGC 6946 a visual magnitude of 8.9. Don’t be misled by this seemingly “bright” figure. As is the case with similar face-on galaxies like M33 and M74, the light is spread across a wide area (in this instance, 11 by 10 arcminutes), resulting in a very low surface brightness. Working with a 10-inch reflector on a recent evening, I could barely glimpse NGC 6946 as “a large, circular glow (averted vision only).” The limiting magnitude that night was 5 – not exactly a pristine condition. If you want to spot NGC 6946 with a small-aperture scope or tease out any kind of structural detail with a big Dob, you’ll want to work under clear, magnitude 6 or better skies.

NGC 6949 has been nicknamed, the “Fireworks Galaxy.” The moniker is appropriate. Since 1917, nine of its stars have erupted as supernovae - the last in 2008. This is an amazing figure when you consider that NGC 6946 is about half the size of our Milky Way Galaxy.