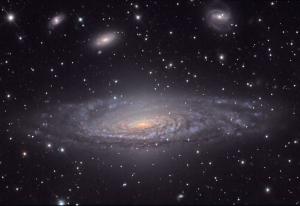 I first viewed NGC 7331 in the fall of 1977, using a 3-inch reflector and a magnifying power of 60X. To me it appeared as “a faint small object that seemed slightly elliptical.” A recent observation with a 4.5-inch reflector yielded a similar result. In both instances, I was seeing the galaxy’s nucleus. Would a larger scope reveal the spiral arms? A 10-inch reflector did, but barely. In my logbook, I wrote, “Some hint of extensions – like a small, faint M31.” 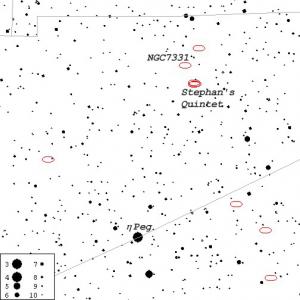 The accompanying finder chart shows the location of NGC 7331 – a 4 ½ degree star-hop north and slightly west of eta (η) Pegasi. Just ½ degree SSW of NGC 7331 is Stephan’s Quintet. This clump of galaxies, ranging in magnitudes from 12.7 to 13.1) is a favorite target of owners of large-aperture telescopes.