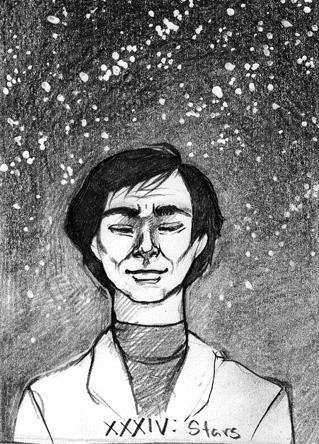 As a young man on a cross country road trip/relocation to San Francisco, I stood on the North Rim of the Grand Canyon, mesmerized and lost in the sublime. "I can't believe she dragged me 2,000 miles to look at a hole in the ground," a harried, sweating, middle-aged man confided in his best colloquialism. Bemused, I could only smile politely. Later that evening, camped out under the great expanse and canopy of the unsurpassed beauty of the sky, I reflected on the twinkling distant points of light and on holes in the ground.

It was the mid 1970's, and an up-and-coming astronomer by the name of Carl Sagan (1934-1996) was literally introducing millions of people to the wonders of the Universe in his inimitable way. Expressing admiration at the vastness of space and time was his forte. He would say, "The total number of stars in the Universe is larger than all the grains of sand on all the beaches of the planet Earth," and we would struggle to wrap our minds around the concept. His award-winning 1980 television series Cosmos: A Personal Voyage would further fascinate spellbound viewers and challenge us to fabricate a personal connection and relationship with the Universe. 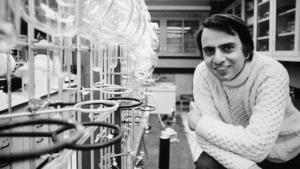 Noted for his sense of childlike wonder in the Universe, Sagan captured the interest of millions of people for whom science was a closed book. Sporting a strong inquisitiveness about nature, he frequented the New York Public Library and the American Museum of Natural History and Hayden Planetarium from an early age. With his imagination nurtured and encouraged by his parents, Sagan graduated from the University of Chicago and taught and researched at Harvard before being granted a full professorship at Cornell University in 1971. His professional research, writing, and scholarly contributions were prodigious, wide-ranging and important. However, it was his ability to convey ideas which allowed many people to understand the cosmos better, for which he is perhaps most remembered and appreciated.

Eminently quotable, Sagan penned: "The nitrogen in our DNA, the calcium in our teeth, the iron in our blood, the carbon in our apple pies were made in the interiors of collapsing stars. We are made of star stuff." In his distinct style, Sagan conveyed the idea that the raw materials that constitute our physical bodies were forged in the bellies of distant, long-extinguished stars. The interrelatedness and connection of all things, living and inanimate, logically follows, and is quite profound. One can scarcely observe a bird soaring through the air, a cascading waterfall, or a rolling rock coming to rest in a mountain’s scree field without the recognition that their common origin stems from the same source: stellar furnaces of eons ago. 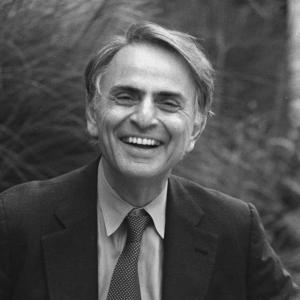 Carl Sagan introduced a generation of people to the wonders of the Universe, and engaged our imaginations. He taught us to think in ways both grand and expansive. He taught us to recognize patterns of kinship, and to appreciate all that you see, wherever you are. And, for this, he was loved and most admired.

The magnificent grandeur of the Grand Canyon takes one’s breath away. To experience it for oneself amidst a clear view of the infinite Universe is nature's prescription for natural mind expansion. To feel the chill of the evening air, to know the stillness of the night, and to hear a symphony echoing from all around is akin to coming to know one’s place in the Universe, and to coming home.

Carl Sagan would have told me to look gently upon the cantankerous stranger who earlier had annoyed me with his view that the Grand Canyon was a mere hole in the ground, for Sagan would have said the man and I were kin.

The atoms in each of us were born of the same place.

Our star stuff was our common bond.