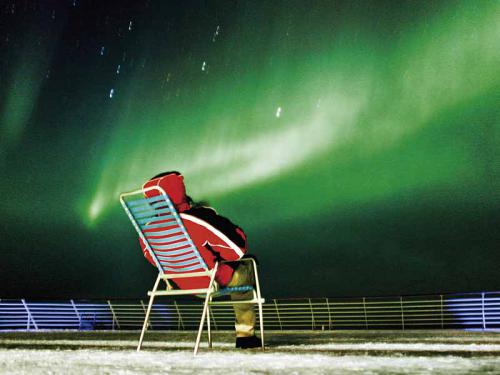 Bob liked to talk about one thing and one thing only: the aurora borealis. He could tell you anything you could ever possibly want to know about the northern lights, and then some. He might go on for hours in his monotone voice, if allowed. His knowledge was so substantial, the minutia so detailed, that I doubt most postdoctoral fellows could easily follow along with his discourse. I couldn’t.

Bob was a young man whose work I supervised in a sheltered workshop decades ago in Greenwich Village. A few years my senior, he assembled and boxed silver plated butter dishes. It was very difficult for him to do so, let alone quickly and efficiently. It was difficult to know how to screw the knob on the cover, difficult to place the cover on the base, and difficult to wrap the assembled product in tissue paper. Properly placing the finished product in a box for the next person to close was the hardest step of all. Often frustrated and agitated, he would like to talk about the aurora to divert his attention from this obscure and incomprehensible task at hand.

This juxtaposition of intense knowledge of a subject and lack of ability elsewhere has a name for it; back then, it was a degrading and dark connotation. Yet, suffice it to say that I looked upon Bob in awe; he awakened me to the profound and wonderful possibilities of human differences, and the limitless potential of the human mind, more than anyone had before.

I’ve never seen the aurora borealis in person; I doubt he had. But, I’ve seen images, such as this:

As Bob would explain, the aurora borealis is a natural phenomenon occurring in the northern hemisphere that is purported to be truly awe inspiring. Observed since ancient times, these ethereal displays of bright, gossamer, dancing lights are the result of collisions between gaseous particles in the Earth’s atmosphere with charged particles released from the Sun.

Temperatures above the surface of the Sun reach millions of degrees Celsius. At this intense heat, collisions between gas molecules occur frequently and explosively. Free protons and electrons are thrown from the Sun's atmosphere by its swift rotation and escape through holes in its magnetic field. These charged particles are blown towards the Earth through the workings of the solar wind, and are mostly deflected by the Earth's magnetic field. However, due to Earth’s magnetic field being weak at the North Pole, some particles are able to enter the atmosphere and collide with gas particles. These collisions emit the beautiful dancing lights of the aurora borealis, generally extending from 50 miles (80 kilometers) to as high as 400 miles (640 kilometers) above the Earth's surface.

The various displays of color are due to the type of gas particles that are colliding. The most common, a pale yellowish-green, is produced by oxygen molecules located about 60 miles above the Earth. All-red auroras are produced by high-altitude oxygen, at heights of up to 200 miles, and are rarer. Nitrogen produces blue or purplish-red aurora. Auroras tend to be more frequent and spectacular during high solar sunspot activity, which cycles over approximately eleven years.

Many legends and myths abound in northern cultures to explain the northern lights, and their effects. For instance, the Japanese people believe that conceiving children under an aurora borealis will bring good luck. They flock to Alaska in the wintertime and the hotels are booked up years in advance.

Some of us will have the awesome experience of viewing the northern lights in Alaska in the wintertime. It is something I look forward to myself. I look forward to viewing the amazing displays of dancing lights, and of having my breath taken away, as so frequently occurs among fascinated viewers.

As well, I look forward to reminiscing on my days with Bob so many years ago. I look forward to reflecting on this mosaic known as humanity, this beautiful tapestry, knowing that everyone, everywhere, is a needed and important part, and has something substantial to teach.

So, please, if you see me in Alaska in the wintertime, say hello.

I’m reserving a frozen smile, and an icicle encrusted moustache.