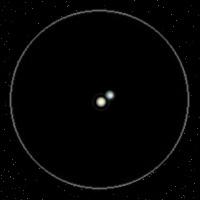 We open the New Year with a double star that's as easy to split as it is to pronounce its Arabic name, Kaffaljidhma. We'll simply refer to it by the Bayer designation, gamma (γ) Ceti. Discovered by the German-Russian astronomer F. G. W. Struve in 1825 (it bears the Struve Catalog identity ∑299), gamma Ceti is the southernmost member of a circlet of stars that forms the head of the celestial Whale.

Gamma Ceti's component stars are separated by 2.3 arcseconds, putting them at the resolution limit of a 2-inch scope. However, the primary is 9 times brighter than its partner (magnitudes 3.6 and 6.2), making them a challenge for telescopes with twice the aperture, even under ideal seeing conditions. My first split of gamma Ceti was accomplished with a 5-inch f/12 Maksutov-Cassegrain and a magnifying power of 250X. The companion appeared as a bump on the primary diffraction ring of the main star.

There’s an interesting twist to the colors observers report when viewing gamma Ceti. Most note colors of yellowish and blue – the opposite of what you’d expect for a pair whose spectral classes are A3 and F3. These impressions are likely illusory - a result of a contrast effect between a bright primary and fainter companion. 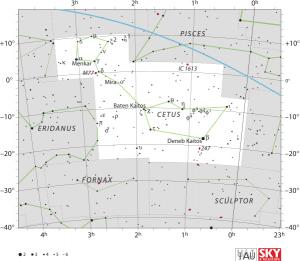 As they say in the TV ads, "But wait, There’s more!" A 10th magnitude K-type dwarf situated 14 arcminutes to the northwest shares the same proper motion as the main pair. All three lie about 80 light years away.

Gamma Ceti is just 3 degrees north of the M77. If you happen to be visiting this galaxy and the seeing conditions are favorable, don’t depart without giving Kaffal-whatchamacallit a try.