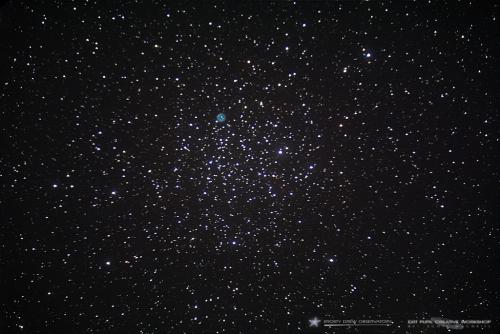 There’s a saying that goes, “You can’t see the forest for the trees.” In the case of the planetary nebula NGC 2438, “you can’t see the nebula for the stars.” NGC 2438 lies within the northern portion of the open cluster Messier 46 and is often overshadowed by the surrounding stars.

M46 and NGC 2438 are located in a rather star-poor region in the northwest corner of Puppis. To find them, trace an imaginary line from beta (β) Canis Majoris through Sirius and extend it about 14 degrees eastward. Here, binoculars and finderscopes will reveal a pair of clusters just 1 ½ degrees apart. The brighter, splashier one is M47 (we’ll look at that one another time). The fainter, more concentrated one to its east is M46.

M46 was discovered by Charles Messier in 1771. Shining at 6th magnitude, it spans an area about 20 arc-minutes across and contains some 180-plus stars brighter than 13th magnitude. My first encounter with M46 came in 1978 when I viewed it with a 3-inch reflector and magnifying power of 30X. My logbook entry reads, “much fainter than 388 (note: my 1966 edition of Norton’s Star Atlas plotted M47 using its Herschel designation of 388); individual stars hinted at with averted vision.” In 2010, I revisited M46, using a 4.5-inch reflector and the same 30X magnification. The cluster was more readily resolved, and I noted “numerous mag 10-11 members.” On both occasions, NGC 2438 went unobserved. I had failed to see “the nebula for the stars.” 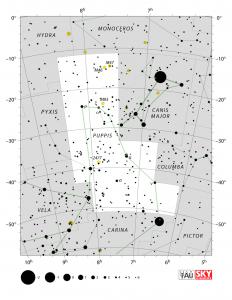 That changed last winter when I made a purposeful search for NGC 2438. Using a 10-inch reflector and a magnification of 80X, I easily spotted the 11th magnitude “puff-ball,” which is about an arc-minute across. Knowing where to look, I switched to the 4.5-inch reflector – this time with 75X. Sure enough, I could make out a faint, averted vision glow in the correct spot. By the way, Messier also failed to see “the nebula for the stars.” NGC 2438 was discovered by William Herschel 15 years after Messier found M46.