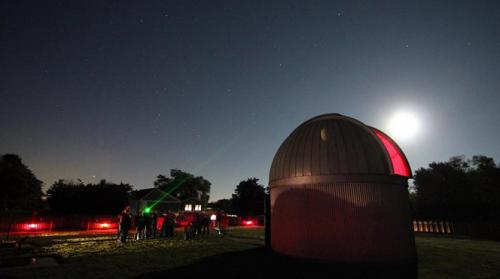 The deep, dark and incredibly cold winter’s night had begun. It was going to be a good one.

It was 7pm, and already a steady stream of visitors was making its way to the sixteen-inch telescope in the dome, and a line was forming outside. This Friday night between Christmas and New Year’s was a special and magical night. Visitors were in a festive mood - anticipation and excitement for the night ahead, mingled with new, sweet memories of the holiday season.

It was as if the Universe was in a festive mood, as well. The masterpiece above was unimpeded by any hint of cloud, or by any washing out by the Moon. The night was dark, still and cold; the crisp chill brought flushes to everyone’s faces. Orion, Jupiter, and the Pleiades hung overhead, begging to be grabbed from the cosmos by eager hands, to be taken home as souvenirs.

We had ooh’d and ahh’d during a four-minute pass of the International Space Station. With our naked eyes, we watched as it rose in the northwest and traversed the sky, shining ever so brightly. An enraptured man remarked he couldn’t believe humans had put it up there. “Believe it,” I intoned. “In fact, two cosmonauts are resting up there in that tiny point of light after today’s record for longest Russian space walks in history.”

Still, what was so special about the night was the composition of the crowd. It abounded with families with young children, many visiting relatives in Rhode Island from far away. Yes, it was the magic in the children: the excitement in the faces; the urgency in their demeanor as they awaited their turn at the telescope.

I asked the young people what they thought, liked, felt. I told them I would dedicate an article to them.

This is that article. It’s dedicated to the young astronomers who brazenly dragged their parents out with them to freeze one cold Friday night during the holiday season of 2013.

Among the several children I talked to that night was Tyler, age 7, who was visiting from nearby Connecticut, and was on his first visit to the Frosty Drew Observatory. As a regular backyard stargazer, he was no Johnny Come Lately to the evening sky. I enjoyed talking to him, and he later emailed me: “I had a great time! It was such a good view through the telescope. I loved seeing Jupiter and the Orion Nebula. Although it was a cold night, I did enjoy standing out to stargaze. Even though a lot of people came, it was fun. I look forward to going again soon.”

Tyler, it was great to see you! Come back again, maybe when the weather is warmer. The sky looks different in every season. But, if you come in the summer, get ready for the mosquitoes. They make dinner reservations, so wear long clothes!

And, to all the other young astronomers who gazed into the mystery of the nighttime sky and told me things from their perspective, I say thank you! Thanks for sharing your youthful enthusiasm and wonderment of the Universe with me. It’s refreshing to see ruddy-cheeked faces peering into the eyepiece of a telescope through the lenses of young eyes. It figuratively opens up a whole new Universe for this old, tired, and well-traveled stargazer.

Frosty Drew is open every clear Friday night throughout the year. Visit Seagrave Observatory in North Scituate on Saturday nights, and Ladd Observatory in Providence on Tuesday nights, too. Just check in advance regarding opening times.

On behalf of the staff and other docents at Frosty Drew, I hope to see you back!

And, remember: Keep looking up!