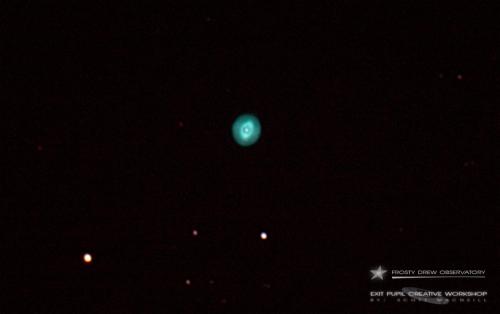 From Puppis and the planetary-within-a-cluster combination of NGC 2438 and M46, we move eastward and further south to the solitary planetary nebula NGC 3242. It gets its nickname “Jupiter’s Ghost” because its angular size and slightly oval shape (40” by 35”) approximate those of its namesake planet. Make Jupiter 10 magnitudes fainter and change its color from lively yellow to pale blue-green, and you have NGC 3242 – Jupiter’s Ghost!

Begin your search for NGC 3242 by centering your finderscope on the 4th magnitude star mu (μ) Hydrae, then dropping 1.8 degrees south and slightly west. A low-power search should turn up an out-of-focus 8th magnitude “star.”

What next? If you’re using a small-aperture telescope (4 inches or less), boost the magnification to 120-150X and look for the nebula’s oval shape and bluish color. Scopes in the 6 to 10-inch aperture range will tease out more detail and capture the 12th magnitude central star. If you prowl the skies with a large-aperture Dob, look for the dark area between the central star and the surrounding bright oval-shaped ring that gives NGC 3242 the overall appearance of (as Arizona amateur Steve Coe notes) the “CBS Eye.” 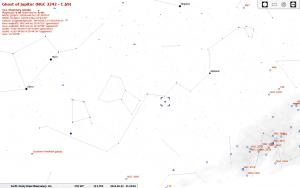 “Jupiter’s Ghost” was discovered by William Herschel in 1785. Various estimates place its distance and true size at around 1500 light years and one-half light-year, respectively.