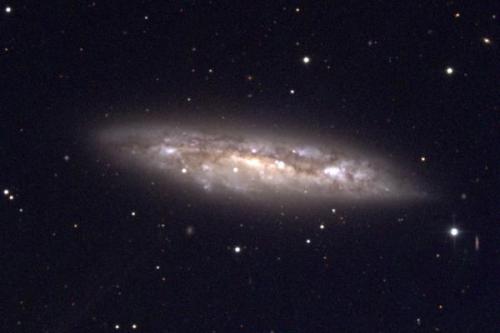 Not far from the Big Dipper “bowl” star Merak (β Ursae Majoris) are two Messier objects - the edge-on spiral galaxy M108 and the planetary nebula M97. M108, discovered by Pierre Méchain in 1781, is nearer to Merak, lying just 1.5 degrees to its southeast.

A 10th magnitude object with 8 by 2 arcminute dimensions, M108 has a low surface brightness. Nevertheless, the small-scope owner can capture it, provided he or she sets up in a dark-sky location on a clear, moonless night. I once captured M108 from the camping area at Stellafane in Springfield, VT, using a 4-inch f/4 rich-field reflector and magnification of 74X. It stood out as a surprisingly easy elongated glow.

Things got interesting when I revisited M108 this past spring with a 10-inch f/5 reflecting telescope and magnifying power of 139X. The increase in telescope aperture and magnification brought out detail not seen with the RFT. M108 had a noticeably blotchy appearance – a ghostly version of M82. Near its center was a 12th magnitude star - a foreground Milky Way star that could easily be mistaken for a supernova erupting inside M108. 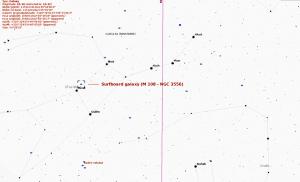 Just 48 arcminutes southeast of M108 is M97. We’ll pay a visit to this interesting planetary nebula next month.