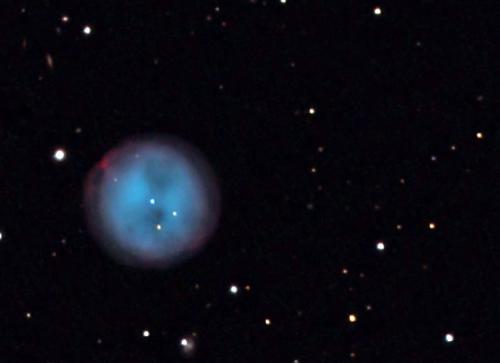 Last month, we paid a visit to the spiral galaxy M108. I promised to feature its neighbor, the planetary nebula M97, this month. Did you take a sneak peek? I don’t blame you. Just 3/4 degree southeast of M108, M97 can be glimpsed in the same low-power field. Their seeming nearness is an illusion. M108 lies some 45 million light years distant, while M97 is ensconced within the bounds of our Milky Way Galaxy at a distance of around 2000 light years.

Like M108, M97 was discovered by Messier’s contemporary Pierre Méchain in 1781. Described as one of the fainter of the Messier objects, M97 can nonetheless be glimpsed with small aperture scopes. I first saw its ghostly 10th magnitude, 3.3 arcminute-wide form with a 3-inch reflecting telescope and magnifying power of just 30X 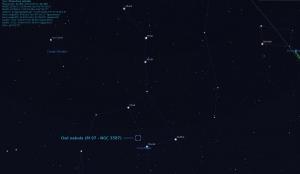 In 1848, Irish astronomer William Parsons, the 3rd Earl of Rosse, studied M97 with his colossal 72-inch reflecting telescope (the “Leviathan of Parsonstown”). He noted and sketched a pair of dark circular areas within the nebulosity that gave M97 the appearance of an owl’s head, hence its modern-day nick-name the “Owl Nebula.” Fortunately, you won’t need Parsons’ Leviathan to see the Owl eyes. With patience and a magnification of 138X, I once captured fleeting glimpses with a 10-inch reflector. The limiting magnitude that night was about 5. From a dark-sky site, a smaller scope should be able to do the trick.