ENCELADUS: A World of Ice 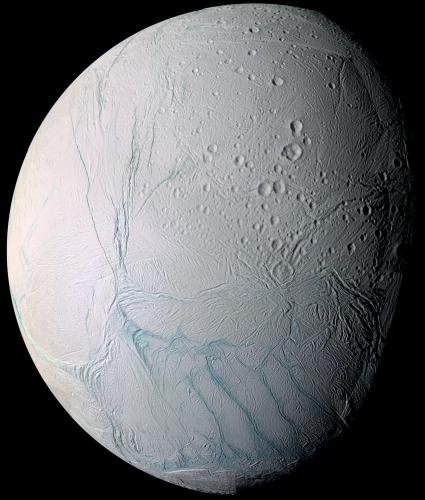 Enceladus (en-SELL-ah-dus) is one of the many moons of the planet Saturn and by far one of the most interesting objects within our solar system. It features a strikingly pale surface – a thick covering of ice. But scientists are now speculating that there is more to this icy moon that meets the eye…

Although Enceladus was discovered back in 1789 by the English astronomer William Herschel, it was not until the advent of space travel that astronomers were finally able to glimpse the icy features that dominate Enceladus’s surface. In this photo one can make out several dark streaks of blue contrasted against the white landscape. These are known as the “Tiger Stripes” of Enceladus. During the mission of the space probe Cassini in 2005, it was discovered that these streaks were not unlike the fissures of the Californian desert. And what’s more is that these fissures act like geysers, ejecting ice material from beneath the surface. This has led scientists to believe that Enceladus has “cryovolcanism” which means essentially ice volcanoes. They act in a very similar way to volcanoes here on Earth, but instead of large plumes of rock and ash there’s ice. This has led scientists to believe that beneath the surface of Enceladus there is a hidden ocean of liquid water. But according to the laws of physics, the moon should not be warm enough to support such a large body of liquid water. It should all be ice! 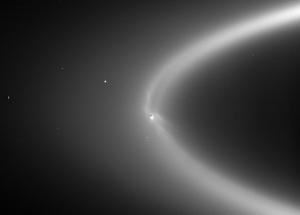 To explain these mysterious plumes, scientists believe that Enceladus experiences certain stretching and compressing as it moves unevenly around its host planet Saturn. As Enceladus goes about its trip around Saturn, it is stretched in one direction and compressed in another. Scientists refer to the combination of stretching and compressing as “tidal forces” which are the same forces by which our own moon causes the ocean tides on the earth. So all of this motion causes Enceladus to heat up, similar to the way that your hands heat up when you rub them together. This heat explains how the interior can remain liquid water and how many of the surface features are formed. And due to the pressures from the interior oceans, water is shot up though these fissures and is frozen by the coldness of space, raining down onto the surface of the planet and interestingly enough, creating a trail of ice particles behind it. In fact, there are so many ice particles that the trail is considered a proper ring of Saturn, called the E-ring!

But scientists are still unsure if these tidal forces are the only forces responsible for heating the moon and so there may still be additional forces which are causing this heat which are currently unknown. But scientists are fairly certain that even if these tidal forces are too weak to explain the internal heating alone, there is still enough evidence for an interior ocean of liquid water. And for scientists, this means that beneath Enceladus’s icy exterior there may be whole oceans teeming with microbial life!