CYGNUS: Swan of the Night Sky 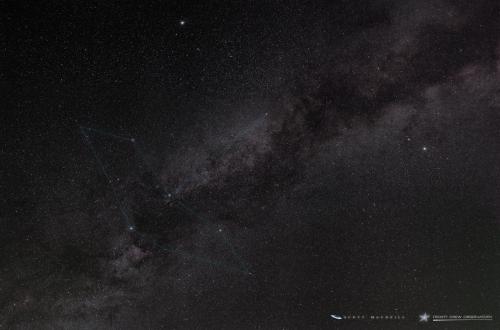 Cygnus in the Summer Triangle over Frosty Drew Observatory

Dominating the summer sky, Cygnus is one of the largest constellations and one of the most recognizable. Comprised of about nine stars, the pattern of Cygnus follows as a swan in flight. Go outside a few hours after dark and look towards the east. You should be able to make out a cross lying on its side. You’ve done the hard work already! The horizontal bar of the cross represents the body of the swan and the vertical arms of the cross represent its wings. The bright star Deneb is the swan’s tail and Alberio is its head. If it’s really dark, you might even notice a faint band of light stretching across the sky – it’s our galaxy the Milky Way! The Swan flies along the Milky Way! 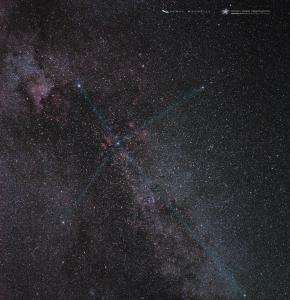 Now the cross itself is quite an easy pattern to see and is what we astronomers call the “asterism” known as “The Northern Cross”. Simply, an asterism is a pattern in the night sky which is easy to see. A constellation on the other hand is one of the 88 official patterns selected by the International Astronomical Union (IAU). And for modern astronomical purposes, a constellation also includes the area around the constellation, as marked in the chart. For example, although Tau Cygni is not a part of the swan itself, it is still considered a part of the constellation. And while The Northern Cross exists as part of the swan, it excludes the wing tips and is therefore an asterism. And now it might be surprising, but the most famous of these asterisms is actually the Big Dipper, which makes up the tail and back of Ursa Major, the Big Bear! There are plenty of easily-found asterisms in the night sky – try to track them down!

Cygnus has some truly remarkable stars. The bright star Deneb, which again is the tail of the swan, is also a part of a massive asterism called “The Summer Triangle” which comprises three bright stars: Deneb, Vega, and Altair. Each of these stars belongs to their own constellation. Vega is part of Lyra the Harp (or Lyre) and Altair is part of Aquila the Eagle. The somewhat dim star Alberio makes up the head of the Swan, and is actually two stars! It’s what astronomers call a “binary system”, meaning that there are two stars orbiting each other. If our own solar system was one of these binary systems, we would see not one sun, but two suns in our daytime sky! Now these two stars, unimaginatively named Alberio A and Alberio B, are strikingly different in appearance. While one star is bright gold, its smaller companion shines with a sapphire blue hue. It’s my all-time favorite! I like to say that these two stars are the jeweled eyes of the swan. One for the bucket list!