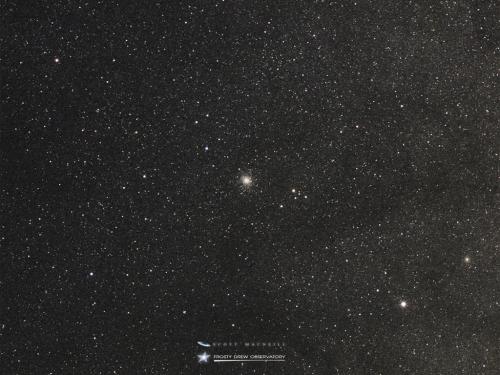 On early evenings in September, the constellation Sagittarius arches above the southern horizon, its rich deep-sky treasures accessible to those of us who inhabit mid-northern latitudes. One of the more spectacular of these cosmic splendors is the globular cluster M22 Its discovery is attributed to the German astronomer Abraham Ihle, who came across it on August 26, 1665 while observing Saturn.

Among globular clusters, M22 is exceeded in brightness and apparent size only by omega Centauri and 47 Tucanae. Much of its grandeur results from its nearness to the earth. At a distance of 10,500 light years, it’s over two times closer than the much-heralded M13. In reality, M13 is half again as large and contains several hundred thousand stars, compared to M22’s estimated 70.000.

I’ve always been a proponent of small telescopes for backyard astronomy, but had to admit that large aperture scopes are the way to go should you want to resolve the stars in a globular cluster. M22 is an exception. I’ve resolved it quite nicely with a 4-inch f/4 RFT (an Edmund Astroscan) and a magnifying power of just 74X. Naturally, to view M22 in all its glory you’ll want to use a large instrument and 2 or 3 times that magnification. 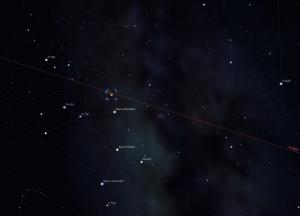 M22 is relatively easy to locate, if you use the “Teapot” of Sagittarius as a guide. In binoculars and finderscopes, it appears as a 5th magnitude smudge just 2 ½ degrees northeast of Kaus Borealis (Lambda [] Sagittarii) - a 3rd magnitude star that forms the top of the Teapot’s lid. Next time you’re visiting M13, drop southward and give M22 a look-see. Which do you prefer?