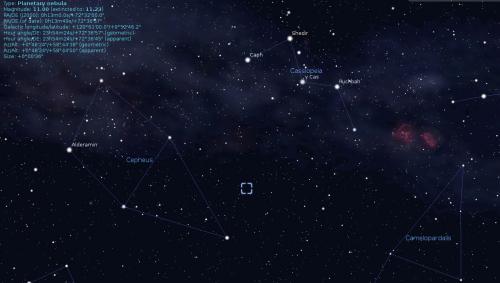 Our November deep-sky target, NGC 40, could be featured any month of the year. Just 17.5 degrees from the North Celestial Pole, it’s circumpolar from mid-northern latitudes. But it’s during mid autumn that NGC 40’s parent constellation Cepheus rides highest above the northern horizon after sunset.

NGC 40 was discovered by Sir William Herschel on November 25, 1788, and bears the Herschel Catalog designation H IV-58 (his 58th Class IV [Planetary Nebulae] entry). A more recent designation, C2, reflects its inclusion in Sir Patrick Caldwell-Moore’s 1995 Caldwell Catalog – his compilation of the finest 109 non-Messier deep-sky objects. NGC 40 is also nick-named the Bow-Tie Nebula, a moniker it shares with the planetary nebula NGC 2440 in Puppis and the Hubble-imaged protoplanetary nebula PGC 3074547 in Centaurus.

Finding NGC 40 is problematic, as it lies in a star-poor region of Cepheus. The accompanying Telrad chart shows it location about one-third of the way from gamma (γ) Cephei (labeled Errai) to kappa (κ) Cassiopeiae. Center your finderscope on the area and begin a low-power search (about 50X should suffice) until you come to what looks like an out-of-focus 12th magnitude star midway between and slightly west of a pair of 9th magnitude stars. NGC 40 can be glimpsed with a 4-inch scope under dark skies, but you’ll need twice that aperture to capture significant detail. Magnifications of 150X and up will reveal a slightly oval 35 X 38 arc second haze surrounding a star of 11.6 magnitude.

If you gaze at NGC 40’s central star, the surrounding nebulosity seems to disappear. Look to the side, and the nebulosity pops into view. The effect mirrors that of NGC 6826 (the “Blinking Planetary” in Cygnus. At a distance of 3500 light years, NGC 40 is about one light year in diameter.