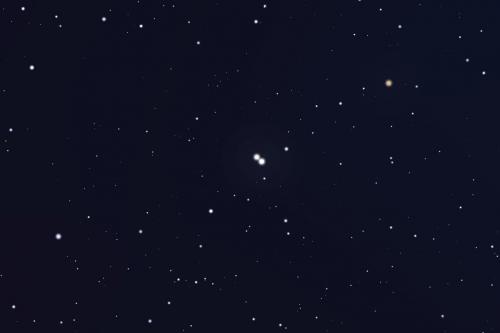 I’m a big fan of “off-the-beaten-path” sky objects. One of my favorites is the little-known double star Struve 817 - the 817th double star catalogued by the German-born Russian astronomer F. G. W. Struve during a survey conducted between 1824 and 1827. I wrote about this little gem in my first “Object of the Month” column 5 years ago. It’s time for a return visit!

According to a measure made in 2010 and posted in the Washington Double Star Catalog, Struve 817 consists of near-twin magnitude 8.68 and 8.93 stars separated by 18.7 arc-seconds in a position angle of 73o. The separation and P.A. differ little from what Struve himself measured around the time of discovery. Astronomers describe stellar partnerships that show little orbital motion as being “relatively fixed.” If the component stars of Struve 817 form a true binary pair, their orbital period must encompass many centuries. 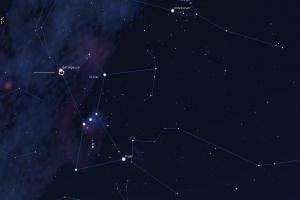 What gives this relatively obscure double star a special allure is its location just 20 arc-minutes south of the red supergiant Betelgeuse. To find Struve 817, simply aim your telescope at Betelgeuse. A medium power eyepiece (75 to 100X works well) should capture this delicate pair shining just outside the dazzling rays of ruddy Betelgeuse. It’s a startling sight. The Washington Catalog lists the spectra of Struve 817’s components as A5 and K. Can you make out a color contrast between the two?

Some years ago, I wrote a four-part seasonal series for Deep Sky Magazine in which I introduced my favorite 100 double stars. Included with such celebrated pairs as Mizar, Albireo, and the “Double-double” epsilon Lyrae was Struve 817. On the next crisp winter night when Orion beckons you to visit his magnificent Nebula, take a minute to travel a road less taken and try for this delightful double star.