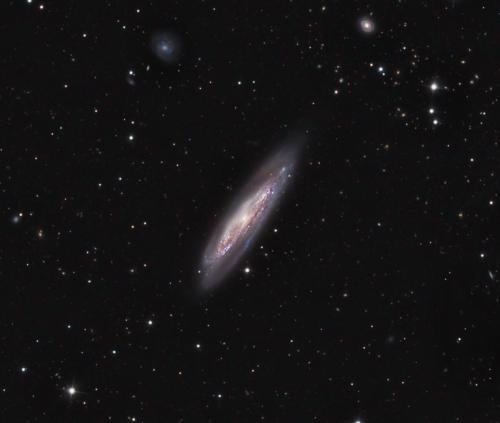 This month, we journey to the edge-on spiral Messier 98, located near the westerly border of the Coma-Virgo Galaxy Cluster. M 98 and its neighbor galaxies M 99 and M 100 were discovered by Pierre Mechain on the night of March 15, 1781 and confirmed by Messier a month later. While the latter two are roundish face-on spirals, M 98 is more edge-on with apparent dimensions of 9 by 3 arc-minutes. At magnitude 10.1, it’s one of the fainter Messier objects, but is still visible with small-aperture scopes. The accompanying sketch shows its appearance through a 4.5-inch reflecting telescope on an evening when the limiting magnitude was 5.0. Patience and averted vision were requisite!

Finding galaxies in this part of the sky can be a daunting task, but M 98 is relatively easily picked up just one-half degree west of 6 Comae Berenices. This 5th magnitude star forms an isosceles triangle with Denebola (beta Leonis) and omicron Virginis (see finder chart). 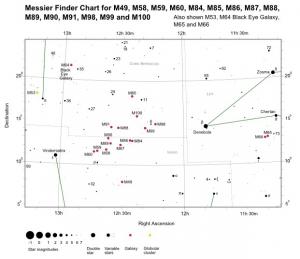 M 98 is somewhat of an oddball as galaxies go. While a vast majority of galaxies are moving away from us as the universe expands, this one is actually heading our way at a 125 mile per second clip. Don’t expect M 98 to loom larger as the years go by. It’s a whopping 55 million light-years away!