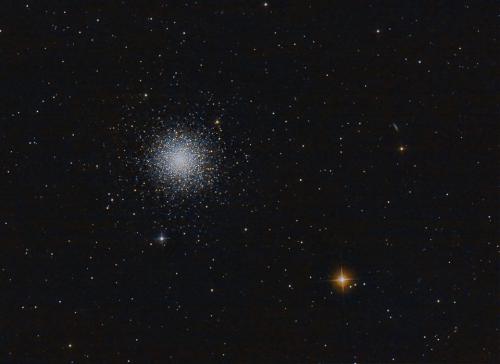 As May gives way to June, backyard astronomers begin to anticipate the arrival of summer’s globular clusters, and with good reason. The globular-laden constellations Ophiuchus, Scorpius, and Sagittarius are beginning to show up in the early evening sky. We needn’t wait for this globular onslaught. Already well-placed for after-sunset viewing is Messier 13 in Hercules - grandest of all the northern sky globulars. Also available is Messier 3 in Canes Venatici. Compared to M13, it’s slightly fainter (magnitude 6.2 to M13’s 5.8) and smaller (18 arcminutes to 20 arcminutes). Looks can be deceiving, as M3 is about half again as distant as M13 (33,000 LY to 26,000 LY) and is intrinsically the larger of the two.

M13 is my globular cluster of choice at public star parties. Conveniently placed between zeta (ζ) Herculis and eta (η) Herculis in the “Keystone” of Hercules, it’s quick and easy to locate – something I consider when a line of people is waiting by my telescope.

When time constraints aren’t an issue, I like to place M3 on the observing menu. It isn’t really all that hard to find, being bright enough to be easily spotted in binoculars and finderscopes (it’s even been seen without optical aid by keen-eyed observers in dark-sky locations). To capture M3, point your telescope midway between alpha (α) Canum Venaticorum (Cor Caroli) and alpha (α) Bootis (Arcturus), but slightly closer to the latter (refer to the accompanying finder chart). A low-power sweep should pick up a roundish smudge of light. Switch to higher magnifications, and you’re in business! 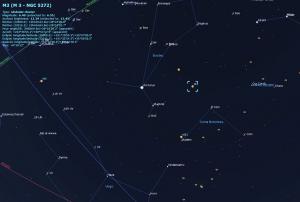 While most globular clusters require apertures of 6 inches and above to resolve their individual stars, M3 can be partially resolved in small-aperture scopes. The accompanying sketch shows its appearance as seen through a 4.5-inch reflector. Visible is the core and a smattering of stars near its outer edge. Large telescopes bring the outermost reaches of M3 into view – a spectacular sight, as an image taken by Amateur Telescope Makers of Boston President Neil Fleming shows. Rotate the Fleming photo about 30 degrees clockwise, and scale and orientation of both fields will be identical.

Think of this as you gaze at M3. You’re looking at a half million stars packed into a sphere just 190 light years across!