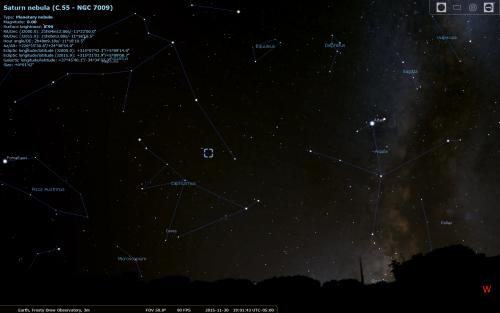 An entry in my astronomy logbook dated October 6, 1977 reads, “I finally notched a real stinker!” No, it wasn’t one of the skunks that occasionally stroll across my back yard while I’m outside observing. My notes continue, “After numerous attempts to see the planetary nebula NGC 7009 (Saturn Nebula), I tried tonight using 60X. To my surprise, a relatively bright, bluish star would not focus clearly. When I obtained clear focus on a nearby star of similar magnitude, I returned to the mystery object. It was still “out of focus”! The elusive nebula had passed as a “star” all the time! I had to chuckle. Hopefully, I will be more careful in searches for other planetaries.”

I was. In rapid order, my trusty 3-inch f/10 reflector and I picked off the planetaries NGC 7662 (the Blue Snowball) in Andromeda and NGC 6826 (the Blinking Planetary) in Cygnus.

NGC 7009 was discovered by William Herschel in 1782. When William Parsons, the third Earl of Rosse, viewed it in the 1840s with his 72-inch reflector, the Leviathan of Parsonstown, he noticed fine lines, or ansae, stretching out to the sides. The visual similarity to the planet Saturn led Parsons to give the nebula its present-day nickname.

The Saturn Nebula shines at magnitude 8.3 and sports angular dimensions of 45” by 25” - slightly larger than its namesake planet. Estimates of its distance are all over the map, ranging from as little as 1400 light years to as much as 5200 light years.

The best way to find the Saturn Nebula is to point your telescope at the 4.5 magnitude star nu (ν) Aquarii. Using a magnification of 50-75X, move a little over a degree west until a bluish star appears in the field. Then, jack up the magnification as high as your telescope and seeing conditions allow. Under ideal skies, telescopes as small as 6-inches might capture the ansae and 12th magnitude central star. Much larger apertures will be a must when the Saturn Nebula is observed from typical suburban locations.

Recently, I revisited the Saturn Nebula, this time with a 10-inch f/5 reflector and magnifying power of 208X. It was definitely elongated, but I was unable to see the ansae or central star (the limiting magnitude that night was 5.0). By chance, someone nearby was viewing the planet Uranus. I jumped at the chance to make a color comparison. Like the Saturn Nebula, it sported a pale blue color. On occasions when its ansae aren’t visible, we could aptly refer to NGC 7009 as the “Uranus Nebula.”