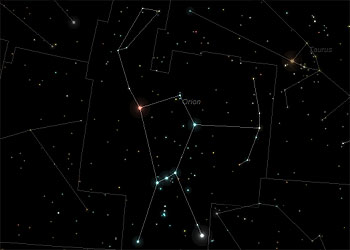 Orion, the hunter, stands by the river Eridanus and is accompanied by his faithful dogs, Canis Major and Canis Minor. Together they hunt various celestial animals, including Lepus, the rabbit, and Taurus, the bull. According to Greek mythology, Orion was in love with Merope, one of the Seven Sisters who form the Pleiades, but Merope would have nothing to do with him. Orion's tragic life ended when he stepped on Scorpius, the scorpion. The gods felt sorry for him, so they put him and his dogs in the sky as constellations. They also put all of the animals he hunted up there near him. Scorpius, however, was placed on the opposite side of the sky so Orion would never be hurt by it again.