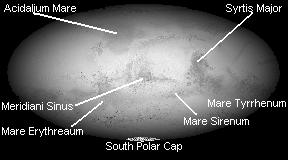 In June the first of two Mars rovers was launched. While it is on its way, on August 27/28, Earth (near its farthest from the Sun) will pass Mars (which will simultaneously be near its closest to the Sun). The combination means a very close approach of Earth and Mars. Indeed, at no time since 28,000 BC or until 33,000 AD will Mars and Earth ever be closer. We'll be able to see a larger and brighter Mars than ever before in a telescope on Earth. At Frosty Drew Observatory, we'll be turning our telescope on the red planet more and more. Hopefully we'll get great views but this depends on clouds both here and on Mars. During the last two close passes of Mars, large dust storms made the surface invisible.I suspect that lots of people will show up early on Friday nights to see Mars in all it glory, but if they do, they will have to wait quite a while. At the beginning of July, Mars will rise just before midnight. Each week it rises 20 to 30 minutes earlier but at the point of the closest approach it will still not rise until about 8:40 PM just as twilight is ending. Mars won't reach its best viewing point until very late at night as seen from the following table:
Date - Begin Best
7/04 - 12:32 4:32
7/11 - 12:01 4:14
7/18 - 11:40 3:54
7/25 - 11:15 3:28
8/08 - 10:49 3:04
8/15 - 10:22 2:28
8/22 -- 9:52 2:01
8/29 -- 9:21 1:27Of course, it will be possible to begin viewing earlier (the "Begin" numbers) but the view usually will be less clear because the planet will be seen low to the horizon where it will be partially obscured by moisture and layers of air. We will plan to be open (weather permitting on each of the Friday nights, plus the best viewing night on (a Tuesday).What will we actually be able to see? Even with our best eyepieces, Mars will not be very large. At 25.1 arcseconds across, Mars will be only about half the diameter of Jupiter or Venus at their closest. So why all the fuss? Neither of these other planets allows us to see their surfaces. If conditions permit we should be able to see definite detail on the surface. The map shows the areas which we have the best chance of seeing. The polar cap and Syrtis Major are high contrast areas which normally standout well. The various "mare" should also be visible. It is very unlikely that we'll catch a glimpse of the four largest volcano's in the Solar System even though the greatest of these (Olympus Mons) stands far taller than Mount Everest and covers an area which would stretch from Charlestown into Ohio. The problem is that the mountain and the surrounding lowlands are the same color. Spotting a mound of sand from a high flying airplane would be difficult if the sand was piled up on a beach. This is practically what we'll be trying to see.Mars is called the red planet, but this is really a great exaggeration. Mars is more nearly orange and brown earth tones. The polar cap is quite white and Syrtis Major appears a dark brown to black shade but the rest of the planet is subtly shaded. Although 19th century astronomers didn't know it, subtle gradations in shading cause the eye to think it sees edges where none in reality exist. Less than perfect eyepieces sometimes compounded the problem with internal reflections. These effects result in the appearance of lines, often pairs of lines, where none exists. Sound familiar> Yes these are the famous "canali" of Shaperelli which became incorrectly translated as canals. It was then only the shortest of steps to people believing they were seeing the works of a dying race staving off drought with huge irrigation ditches. Life may exist in simple creatures (bacteria, lichen and fungi) but we now know that conditions were never adequate for advanced species to arise. Edgar Rice Burrough's "Barsoom" will always remain a world of the mind rather than our second nearest neighbor.If (and I cordially invite you to do so) you come to Frosty Drew Observatory to see Mars during the months of July, August and September I suggest that you plan to come later in the evening rather than earlier. Mars will be better placed, and usually the "quick peek" crowd will have thinned. Except for special nights, we aren't open to the public beyond midnight, so 10:30 to 11:30 is your best bet. Bring you telescopes if you have one. It can be fun to compare what you see in your equipment to our telescope. Sometimes small telescopes do very well against larger ones.