Viewing the Milky Way with Binoculars 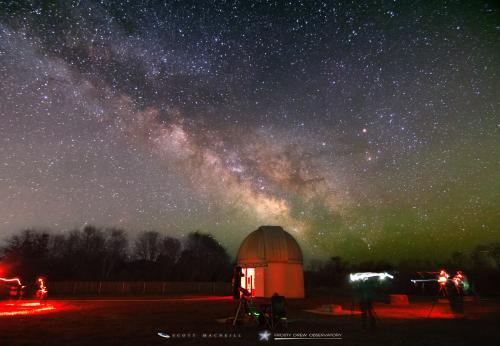 Nothing in the sky better viewed through binoculars than the Milky Way Galaxy [MWG]. Your eye can't gather enough light to see this wonder clearly. Telescopes have too narrow a field of view to give a sense of the galaxy's grandeur. Like Baby Bear's things in Goldilocks, your binoculars are just right, gathering plenty of light without sacrificing too much of the panorama in the process.

The odd map I have provided is a Mollweide Projection of the entire MWG with the galactic equator running along the centerline left to right. Mollweide projections flatten a sphere onto a plane but at a cost of severe shape distortion. The rounded triangular region that represents the portion of the sky hidden from Charlestown would be a circle on a sphere!

The small cross in the center of the projection notes the center of the MWG. Within the last decade we have confirmed that this object called Sagittarius A* is a super massive black hole. Dust between the solar center and the core has long hidden Sagittarius A* from us, but new telescopes operating in the deep infrared and x-ray spectrum's can look past the dust into the very center of the MWG. When you turn your binoculars to this area, you can't see much except the dust which has bedeviled us so long.

To either side of the dust cloud, huge numbers of stars are visible with pockets of star forming gas and clusters of stars banded by gravity. This whole area called M24 contains the central star fields. Only brightest stars in the core can be seen this far away, but the area contains thousands of the very largest and brightest stars making this area the most magnificent star fields in the sky. In a sphere one light year about the Earth, there is only a single star - our Sun. If the Earth was in the core, there would be tens of millions of stars in that same single light year sphere. We can only imagine what the sky would look like if that was our neighborhood.

This area abounds with globular clusters. These compact balls, each holding hundreds of thousands of stars, can easily be mistaken for stars in binoculars. Any vibration makes recognizing them all but impossible. Prop your binoculars against a study support when you look for globular clusters. Two globular clusters are so bright and large that I recommend finding them first. Well away from much of the MWG in the constellation Hercules is M13 - the biggest, closest and brightest of the globulars. Practice with this object until you are sure what you are sure you can recognize globular clusters. Move back to the the region between the Teapot and Scorpio. If you look at the brilliant star Antares you will find a smaller star-like region which is your second practice globular cluster M4.

Once you can easily see M4 you are ready to look for M9, M19, M22, M28, M54, M69 and M70. All of these are easily bright enough to be seen. Using a star map, find the star field around them. Before long you will be a practiced hand at locating them. 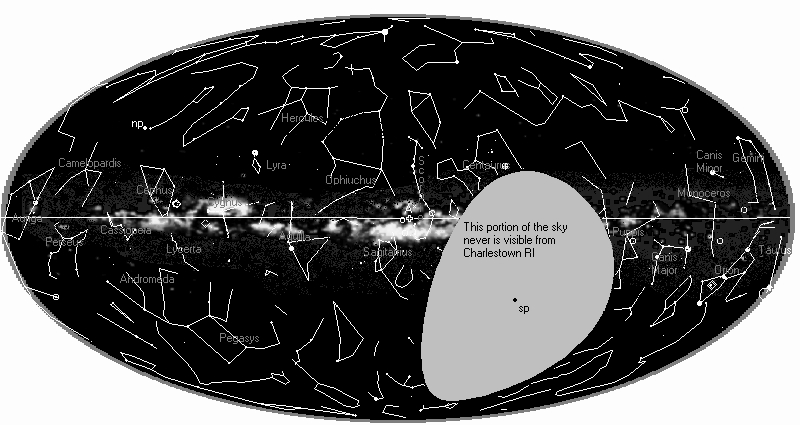 You aren't through visiting the MWG yet. The star fields between Cygnus and Scorpio are usually easiest to see on summer or fall evenings. The area of the MWG which is opposite the core lies in Orion, Taurus, Gemini and Auriga. These areas have far fewer stars because the are the rimward side of the MWG where stars are not found. However, these areas have something wonderful to see, the relatively few stars mean that we can see the structure of the MWG better. We can see the main MWG and long streamers separated by starless gulfs. Unlike the dust lanes in the core, these are true gulfs between the arms of our galaxy which are the streamers we see. The arms of the galaxy contain the birth grounds of stars and appropriately the Orion arm contains the magnificent stellar nurseries M42 and M43. Located in Orion's scabbard we can see very young stars. Prop you binoculars against a firm support and see if you can see spot the tiny star group called the Trapezium.

I hope that this convinces you to dust off your binoculars and use them to view a much overlooked wonder of the sky, the Milky Way itself.