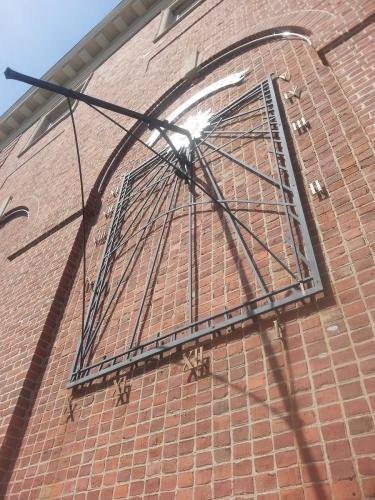 Most of the time when we think about astronomy we think about stars, planets, comets and galaxies, and well we should. Maybe we think of the tools of our trade, scopes, instruments, clocks, computers and software. Yet I find it fascinating to consider the tools that no longer are used except as curios and oddities. I wrote a column long ago called Requiem for a Sextant about Naval Academy no longer offering instruction in navigation by the stars. Today I'd like to talk about the most lowly of the tools developed by astronomers - the sundial.

It may come as a bit of a surprise but sundials are very complex objects, at least if they try to achieve a bit of accuracy. The Societe Astronomique de France has a whole section of their society devoted to sundials - Commission des Cadrans Solaires. All this for the lowly birdbath with a gnomen sticking out of it. By the way, the word gnomen not only refers to the stylus in a sundial's face but to person who looks at a sundial to see what time it is. Did you know you were practicing gnomenology the last time you looked at a sundial? It isn't the study of a band of stout little diamond miners singing Heigh Ho to the princess Snow White in spite of what it sounds like.

Sundials can be oriented in almost any direction, but one which works just fine lying horizontally will not work correctly if it is copied on the wall of a building. More than a few of these pretentious objet d'art have had to be rebuilt when they were bolted in place only to have the new owners find that they didn't work at all! A sundial which works in the northern hemisphere tells time backwards in the southern hemisphere. Ones aligned north/south won't work if rotated any other way.

One of the most interesting sundials is the two sided sundial which keeps daylight savings time on the top side during the spring and summer and keeps standard time on the underside in fall and winter. It switches from one side to the other automatically on the day of the equinoxes (near March and September 21st every year). I know that official daylight savings time is based on the last Sunday of April and October but the Sun doesn't care. It just changes on its own implacable schedule. 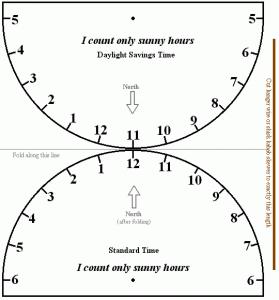 I've done a bit of trigonometry and designed a two faced sundial, specifically for the latitude of Frosty Drew Observatory. While designed for our latitude, the sundial will work pretty well for a band of 100 miles north or south of 41.3°. You can print this sundial directly from the web site with your browser. Take a piece of cardboard (shirt cardboard is best) and fold the sundial over an edge at the gray line. Glue or tape it down and trim excess. Take a coat hanger wire or a bamboo skewer for shish kabobs and cut it to exactly the length shown. Insert your newly created gnomen at the dot and center it so half the stick is above and below the sundial faces. It will tilt the sundial at the magic angle 41.3°. Take your sundial to a nice sunny spot. Put it on a level surface (this is important). Point the the arrow that says "North" due North. The bottom edge of the sundial face will lie East/West. The gnomen will be parallel to the Earth's axis and the faces of the sundial will be parallel to the Earth's Equator. In Winter and Fall when the Sun is south of the Equator, the bottom side (Standard Time) will be illuminated. In Spring and Summer when the Sun has come north of the Equator the top side (Daylight Savings Time ) will be illuminated.