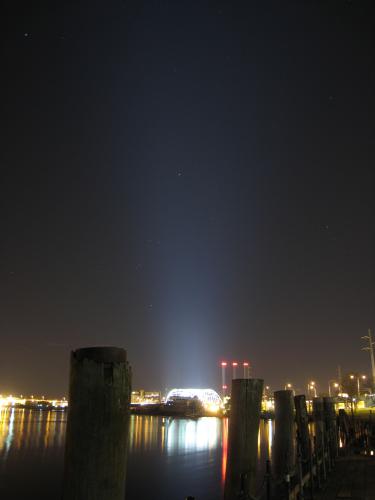 Intense light pollution produced by upward facing, high output, metal halide lights. The constellation Orion is in this image, can you see it?

The dark skies above Charlestown was the principle reason for siting Frosty Drew Observatory in the Ninigret Park in 1989. Dark skies are almost nonexistent in the eastern United States. Reconnaissance photos show a light band from Florida well into Maine along the seacoast unbroken except for a single stretch centered on Charlestown Rhode Island. To find similarly dark skies elsewhere in New England you need to travel to the most rural northern regions of Vermont, New Hampshire and Maine.

Dark skies are not a luxury but a necessity for astronomy. Light pollution has driven observatories east of the Mississippi river to remote western mountains, to the volcanos in Hawaii, and to the most inaccessible parts of Chile. In a relatively few decades even these once dark oases have been invaded by light from Los Angeles, Tucson and San Diego as they expanded.

In our precious corner of dark coastline, the nearest light polluting cities are in the least damaging directions; the northeast and the northwest. The sky revolves around a point above the Earth's north pole confining city lights to two parts of the northern horizon. Most of the sky parades along a broad band centered above the Earth's equator. At our Observatory, this crucial band is located above the totally dark Atlantic Ocean.

This does not mean that our Observatory is immune to light pollution. Any source of light located within the Park obliterates our ability to study dim galaxies and nebula. Even when we can spot these objects, all definition is lost when stray light intrudes. During this year's Leonid Shower we had to drape a tarpaulin over a distant Coke Machine to preserve our night vision. It was far worse when for two weeks following a recent festival two street lights were left on more than a quarter mile away. Their effects were appalling. Visiting astronomers were unable to use their equipment. Inside the Dome where we could shield ourselves from the direct light, the illumination brightened the sky so much that only the brightest objects could be seen. Even for the brightest objects, contrast and detail were obliterated.

The Observatory is sympathetic to various uses of Ninigret Park. We know these activities provide revenues which help keep the Park functioning. During the festivals we grin and bear it, happy to have additional attendance. Our concerns is light which doesn't cease after the festivals leave. Our greatest nightmare is a permanent facility with illuminated buildings and parking areas being built anywhere in the Park.

It is hard to imagine how dim astronomical nebulae and galaxies are. These objects are a billion to a hundred billion times dimmer than moonlight. Lights on a nearby building will be much brighter than the Moon. Even our large telescope is of little help because it amplifies not only the dim light of the distant galaxy or nebula but the stray light and sky shine from sources here on Earth. A nearby illuminated building would simply destroy the ability of the Observatory to function. Ultimately it would mean the end of the Observatory. Our disillusioned unpaid volunteer staff would drift away leaving a nine foot tall white elephant rusting in its aluminum dome.

Compromise with light pollution is a meaningless term for the Observatory. A little stray light by anyone else's definition is a terminal disaster to us. Even if a nearby building was very conscientious in directing all outside lights downwards and blocking as much incidental light as possible, the reflected light and sky shine would still be millions or tens of millions of times too bright. While a distant building which took these type of precautions would cause little difficulty, a nearby building would doom the Observatory.

While many people never wish to spend a Friday evening looking through a telescope, the Observatory is an important educational facility. We invite everyone every clear Friday night to see the wonders above our heads. In the last three years we have been visited by more than 2000 children in various children's groups (schools, scouts and families). One girl scout troop traveled all the way from North Adams Massachusetts. Children come to us with telescopes hoping to learn about the night sky. The Observatory is a rare educational facility. We know of only one other such institution. It's in Nebraska! Both organizations were erected by and funded by donations, are intended for public use rather than as a private hobby, and are staffed by knowledgeable unpaid volunteers. While some clubs and universities open their doors for limited numbers of hours each month, a truly public observatory is an almost unique facility. What a shame it will be if light pollution closes our Observatory.