Jupiter King of the Gods and Planets 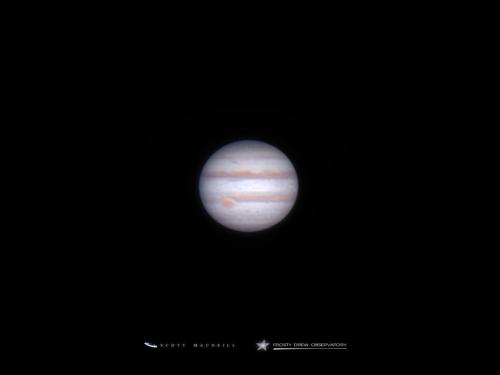 Jupiter, with the Great Red Spot in view, captured at Frosty Drew Observatory

Jupiter ("Iuppater" in Latin) was the Roman counterpart of the Greek god Zeus. He is often called the king of the gods, the thunderer, Pluvius (the storm god) but his name translates as either Law ["ius" in Latin] Father ["pater" in Latin]. We get our words "just" and "justice" from the word "ius". One might question how dedicated he was to the law, but Jupiter certainly left no doubt about his dedication to fathering gods and mortals. Large portions of Roman and Greek mythology deal with Jupiter's amorous liaisons and the consequential wrath of his wife Juno.

Much of the Solar System is named after Jupiter's family and his many mistresses and children. His mother and father were Gaia [Earth] and Saturn. Uranus is his grandfather. Pluto and Neptune are his brothers. Mars and Venus are his legitimate offspring with Juno. Mercury is Jupiter's son with Maia [a Plieades sister]. Jupiter's moons (with the exception of Ganymede who is Jupiter's cup bearer) are named after his mistresses, Metis, Adrastea, Amalthea, Thebe, Io, Europa, Callisto, Leda, Himalia, Lysithea, Elara, Anake, Carme, Pasiphae and Sinope.

I've covered the story of Jupiter's seduction of Alkmene with the help of Mercury last November. Jupiter was too powerful to be harmed by his wife Juno but he had to be discrete because her rage was taken out on the helpless girls that caught his eye. He often appeared in the guise of a someone or something else. In the case of Alkmene, Jupiter chose the form of her husband Amphitrion. With Leda who was tending her waterfowl, Jupiter appeared as a swan. With the shepherdess Europa, he appeared as a bull.

Sometimes the deceptions did not work very well. With Callisto a beautiful golden haired maiden, he sired a young son Arctos. Juno learned of this and as usual she planned a terrible fate for Callisto. Jupiter taking pity on Callisto hid her by changing her into a golden she-bear. Years later, young Arctos, grown to manhood was the greatest hunter in Greece. One day while hunting he came upon Callisto and desired her pelt. He knocked and arrow and shot. Jupiter saw the event and arrived as the arrow was on its way. Grabbing Callisto by the tail he hurled her into the sky. This stretched her tail to a great length. She became the Greater Bear [Ursa Major]. In time when Arctos grew old, Jupiter placed him in the sky as her cub, the Lesser Bear [Ursa Minor]. The tail of the Greater Bear (the Big Dipper's handle) still point to her son - the star Arcturus. Callisto herself is the most distant of Jupiter's four great moons.

The planet Jupiter is as predominant as its namesake. It still has not cooled from the time it was formed almost five billion years ago. Jupiter emits twice as much electromagnetic radiation as the sunlight which falls on it. In contrast, sunlight accounts for 98% of the emissions from Earth. This includes all the heat generated by geothermal action and volcanoes as well as all the energy released by mankind. Storms on Jupiter last centuries as the central heat wells up through the frigid outer layers. One storm called the Great Red Spot has been seen since the invention of the telescope. It is so huge that you could drop the Earth into it without touching the edges. Sustained winds above six hundred miles per hour roar alongside the planet's equator.

Jupiter's greatest moon Ganymede has a diameter larger than Mercury or Pluto. Io, Europa and Callisto have diameters that lie between these the two smallest planets. Io is the most active geological body in the solar system. It has so much volcanic activity that it turns itself inside out every few million years. [Earth has not managed this involution even once in a thousand times as many years.] Europa appears to be a sphere largely composed of water with an icy crust several miles deep. If so, Europa's "ocean" will hold more life giving water than all of Earth's oceans combined.

Deep inside Jupiter, the great pressure has compressed hydrogen into a form never seen under less demanding conditions. This lightest of gasses becomes a metal. The core of Jupiter, including is layers of metallic hydrogen allow electrical currents to flow . Combined with the rapid rotation of the planet, a huge electrical dynamo creates tremendous lightning bolts. These can been seen from spacecraft, but even more startling, these lightning bolts can strike the innermost moons such as Io.

Jupiter is sufficient reason by himself to make a trip over to Frosty Drew Observatory on a Friday evening. However, don't wait too long to make the trip. Each day that passes means that Jupiter sets earlier and earlier. It will only be a few month until we will be forced to wait most of a year for his return.