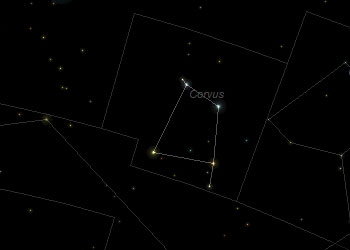 Originally a beautiful dove with an exquisite singing voice, Corvus was asked by his master Apollo to bring him a cup of water. On his way to the well, Corvus noted a fig field where the fruit was almost ready to ripen. He waited for them , then quickly flew to the well, returning very late to Apollo, inventing a story on how the water snake slowed his progress. Apollo realized this lie, and changed Corvus in both appearance and voice, to a large, shaggy crow with the shrill tone known of those birds. Corvus was then placed in the sky next door to the water snake and just out of reach of a cup of water.